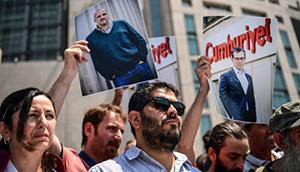 ByTM
Cumhuriyet daily reporter Ahmet Şık, who was detained on Dec. 22 and arrested on Dec. 30, 2016 on charges of disseminating terrorist propaganda, said during the third hearing of the trial of 17 Cumhuriyet journalists and executives on Wednesday that journalism is seen as a crime only in totalitarian regimes.

Şık, who was arrested in 2011 and released in 2012 over alleged membership in the Ergenekon clandestine organization, said the current Turkish judiciary is no different from the judiciary of that time.
Şık had argued then that he was arrested for writing a book criticizing the faith-based Gülen movement as a result of a plot of movement sympathizers within the bureaucracy.
Today Şık is under pre-trial detention on charges of disseminating terrorist propaganda for the Kurdistan Workers’ Party (PKK), the Revolutionary People’s Liberation Party/Front (DHKP/C) and “FETÖ,” a derogatory term coined by the government to refer to the faith-based Gülen movement, which is accused by Turkish authorities of masterminding a failed coup in July 2016. The movement strongly denies any involvement.
“Down with oppression! Long live freedom!” Şık said at the end of his testimony before the court on Wednesday.
According to reports by the state-run Anadolu news agency, Şık was detained for his interview with a PKK leader, Cemil Bayık, and his columns questioning controversial National Intelligence Organization (MİT) trucks that were allegedly carrying weapons to rebel groups in Syria in 2014.
It subsequently emerged that a remark by Şık at a European Parliament event in September 2014 was included in the investigation. Şık had reportedly said that those who work for the PKK are also journalists.
Şık has been openly critical of President Recep Tayyip Erdoğan and the Justice and Development Party (AKP) as well as the Gülen movement.
He has questioned the government narrative about the coup attempt in Turkey on July 15 of last year and claims that Erdoğan played a role in plotting the coup.
The charges brought against 17 Cumhuriyet employees in an April indictment accuse them of aiding the PKK, the DHKP/C and the Gülen movement.
The suspects named in the indictment are Cumhuriyet Editor-in-Chief Murat Sabuncu, the daily’s chief executive officer Akın Atalay, Editor Turhan Günay, editorial consultant Kadri Gürsel, member representative Güray Öz, cartoonist Musa Kart, columnist Hakan Kara, lawyers Bülent Utku and Mustafa Kemal Güngör, manager Önder Çelik, reporter Ahmet Şık, publisher Orhan Erinç, columnists Aydın Engin and Hikmet Çetinkaya, accountant Günseli Özaltay and former employee Bülent Yener.
The suspects were arrested by the İstanbul 9th Penal Court of Peace on Nov. 5, 2016. Atalay was detained at İstanbul Atatürk Airport upon his return from Germany and subsequently arrested on Nov. 12, 2016.