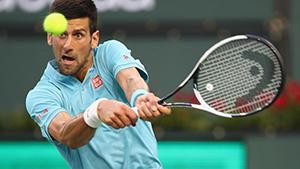 Novak Djokovic has announced he will not play for the rest of the 2017 season because of an elbow injury.

It means the 30-year-old will miss the final grand slam of the year, the US Open, an event he has won twice. His run of 51 consecutive grand slam appearances will therefore come to an end.

World number four Djokovic was forced to retire midway through his Wimbledon quarter-final with Tomas Berdych earlier this month because of the problem.

In his absence Roger Federer is 13/8 favourite with Sky Bet for the final Grand Slam at Flushing Meadows with Rafael Nadal 10/3 and Andy Murray 9/2.

Djokovic has, however, confirmed Andre Agassi will remain part of his coaching team when he returns next year. Agassi started working with Djokovic at the French Open in May.

The Serb said he intended to return at the start of 2018, playing a warm-up tournament ahead of the Australian Open in January.

“I’m confident I will be ready for start of the new season,” he said.

Explaining his decision to close 2017 early, Djokovic added: “After obviously a year and a half of carrying the injury of the elbow that has culminated in the last couple of months, I have made the decision to not play any tournaments for the rest of the 2017 season.

“Unfortunately this is the decision that had to be made at this moment. Wimbledon was the toughest tournament for me in terms of feeling the pain that has escalated.

“I have consulted many of the doctors and specialists and various people from both ends of the medicine (profession) in the last 12 to 15 months, and especially the last couple of months when I felt the injury was getting worse.

“They all agree I need rest, I need time. This is one of those injuries where nothing can really help instantly. You have to allow natural rehabilitation to take its course.”

Federer won the Australian Open earlier this year after a similar six-month break from the game.

Djokovic suggested he intended to play for some time yet once fit.

“It is the most important for me to recover, to be able to play injury free for as long as possible, to compete in the sport that has given me so much, the sport I love,” he added.

“Of course I want to return to the winning form, to win again, to win the trophies. But now it is not the time to talk about it. At this point, I’m focusing on recovery.”

On Agassi, he said: “We’ve been speaking regularly. Andre was with me in Toronto and he helped me find doctors, specialists in treating elbow injuries.

“During this short period of time, we’ve been getting to know each other and building trust and understanding. He supports my decision to take a break, and remains my head coach.

“He is going to help me get back into shape and bounce back strong after the recovery period.”