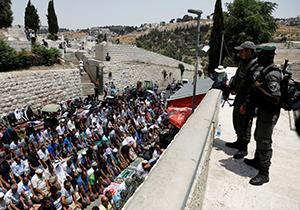 The security cameras at Temple Mount were removed Thursday morning as a result of the Security Cabinet’s decision to remove the heightened security measures implemented at the site after the July 14 attack where two Israeli policemen were killed.

Education Minister Naftali Bennett condemned the decision on Army Radio, saying that he sees it as a political-security weakness.
He also stated that “Instead of strengthening our sovereignty in Jerusalem, a message was conveyed that sovereignty and other areas beyond the Temple Mount could be challenged.”

Newly elected Labor Party leader Avi Gabby, also condemned the decision to remove the heightened security at Temple Mount on Twitter. He wrote that the decision was hasty and irresponsible, adding that this type of unbalanced behavior has damaged Israel’s security and deterrence.

Earlier this week, Israeli authorities dismantled the metal detectors it had placed at the entrance to Jerusalem’s Temple Mount, the placing of which earlier this month led to widespread outrage in the Muslim world, which claimed Israel violated the status quo in the holy site.

The Wakf is set to meet Thursday morning and hold a press conference to announce their decisions about the latest developments in Jerusalem and whether temple Mount will be opened today for prayers or not.