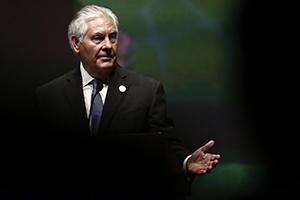 By Nick Wadhams
Secretary of State Rex Tillerson said he isn’t “going anywhere” when asked about media reports that he was increasingly fed up with President Donald Trump and considering stepping down.

The former Exxon Mobil Corp. chief said Wednesday that he intends to remain as the U.S.’s top diplomat “as long as the president lets me” and described his relationship with Trump as “good.”
With the terse remarks, delivered during a photo opportunity with Qatar’s foreign minister at the State Department, Tillerson sought to quell speculation about his future. CNN reported earlier this week that Tillerson was growing frustrated with the White House over vacancies in his department and might quit. The speculation came amid Trump’s rising criticism of another Cabinet member, Attorney General Jeff Sessions, and turnover in the White House communications office.
Tillerson has been one of Trump’s closest confidants, regularly dining with the president at the White House. He joined the president at the Group of 20 meeting in Germany earlier this month, sitting in on a meeting between Trump and Russian President Vladimir Putin, before flying to the Middle East to wade into a dispute between Gulf allies.
But tensions persist. In addition to disputes over staffing, Trump has expressed exasperation over Tillerson’s insistence that the administration certify Iran’s compliance with its nuclear deal with world powers. Trump told the Wall Street Journal this week that “if it was up to me, I would have had them noncompliant 180 days ago.” Trump also has sided with Saudi Arabia in its feud with Qatar even as Tillerson has sought to mediate the dispute between the two U.S. allies.
Speculation about Tillerson’s status was further fueled after the State Department said Tuesday he had taken time off. Tillerson returned to his home in Texas for a couple of days but was back in the office by Wednesday.
“The Secretary has been very clear he intends to stay here at the State Department,” spokeswoman Heather Nauert said at a briefing Tuesday. “We have a lot of work that is left to be done ahead of us. He recognizes that. He’s deeply engaged in that work.”