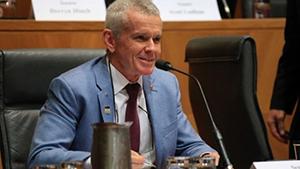 An Australian senator has revealed he renounced his UK citizenship, but it wasn’t confirmed until after he was elected.

Malcolm Roberts, from the far-right party One Nation, said he was “very confident” he could prove he was not a dual citizen.
Under Australia’s constitution, a person cannot run for federal office if they hold dual or plural citizenship.
Three politicians have quit as a row over dual citizenship has intensified.
The Queensland senator, who was born in India to a Welsh father, said he never believed he was British citizen.
Speaking in a television interview with Sky News, Senator Roberts said he contacted British authorities days before the cut-off for candidate nominations.
He said he wrote three times to British authorities saying: “I believe I am not a British and just in case though, if I am, then I renounce it effective immediately.”
Senator Roberts said he received formal registration of his status from British authorities on December 5, 2016 – five months after the federal election.
“I’ve taken all steps that I reasonably believe necessary,” Senator Roberts told Sky News.
The senator has previously confirmed on social media that he was not an Indian citizen.
“I am a citizen only of Australia and therefore eligible to hold the position as Senator in the Australian parliament,” he said on Facebook.
The politician has been under pressure to reveal his status following the resignation of two deputy Greens leaders, Scott Ludlam and Larissa Waters, who were both dual nationals.
This week, Matthew Canavan also quit as Australia’s Minister for Resources and Northern Australia because he faces legal questions over his Italian citizenship.
The Section 44 (Disqualification) states that any person who “is under any acknowledgment of allegiance, obedience, or adherence to a foreign power, or is a subject or a citizen or entitled to the rights or privileges of a subject or a citizen of a foreign power… shall be incapable of being chosen or of sitting as a senator or a member of the House of Representatives”.
This is interpreted by the High Court of Australia as meaning that persons with dual citizenship are not permitted to run for office.
Yes. Dual nationals cannot be elected to parliament in Armenia, Egypt or the Philippines.
In Israel, a person must renounce his or her other citizenship to be sworn is as a member of Knesset (parliament).
In New Zealand, serving lawmakers run the risk of losing their seat if they renew non-New Zealand passports.