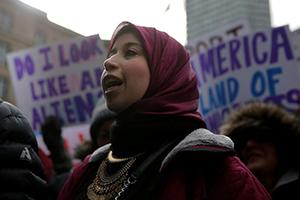 Many are suspicious of those who practice Islam. Many more are trying to reach out.
Emma Green – The Atlantic

Whatever Muslims may be in Trump’s America, they’re not invisible. Everyone—the president, pundits, pollsters—keeps talking about the religious minority group, which makes up roughly 1 percent of the country’s population. According to new data from the Pew Research Center, the intense political focus on Islam has yielded a sort of dual life for American Muslims.
On one hand, many Americans are suspicious of their beliefs and motives, and Muslims perceive widespread hostility toward their faith. At the same time, experiences of discrimination haven’t necessarily changed that much, and many other Americans have reached out to affirm their Muslim neighbors. President Trump may have said he wants to ban Muslims from entering America, but it would be impossible to take the America out of Muslims: Despite heightened anxiety around their place in U.S. culture, their experiences largely mirror those of other religious groups.
American Muslims are notoriously difficult to poll. Roughly 58 percent were born abroad, and another 18 percent have at least one immigrant parent. Many of them aren’t proficient enough in English to complete a lengthy survey, and the population is religiously and racially diverse. Muslims are also geographically spread out: Unlike, say, Catholics, their communities are not centrally organized. Despite these challenges, Pew completed 1,001 telephone interviews between January and April, translating their survey into Arabic, Farsi, and Urdu to facilitate participation by non-native English speakers. While the sample is relatively small, it offers a rough look at a demographic group that is hard to track.
The researchers found that Muslims perceive significant bias against them. Seventy-five percent of respondents said there’s “a lot” of discrimination against Muslims in the U.S. Sixty percent of Muslims—and 68 percent of Muslim women—said media coverage of Muslims is unfair. And when respondents were asked about the most important problems facing U.S. Muslims today, the most popular answers included “discrimination, racism, [and] prejudice,” “Muslims [being] viewed as terrorists,” and “Trump’s attitudes [and] policies toward Muslims.” In general, American Muslims are not fans of the president. Three-quarters of the respondents said Trump is “unfriendly” toward Muslims in the U.S., and 65 percent disapprove of what he’s doing in office—slightly less than the percentage of Muslims who disapproved of George W. Bush on a 2007 version of this survey.
It’s true that a lot of people seem suspicious of Muslims. Half of Americans say Islam is not part of “mainstream American society,” and 41 percent say Islam encourages violence more than other faiths. These numbers are strongest among Republicans and white evangelicals: More than half of each group said there’s a great deal or fair amount of extremism among U.S. Muslims, for example, compared to 35 percent of all Americans who said the same thing. Sixty-five percent of Republicans and 72 percent of white evangelicals also said Islam and democracy naturally conflict. (Interestingly, 30 percent of Muslims said the same thing.)
But the report reveals other layers of Muslim life that complicate a straightforward narrative of victimhood. Almost half of respondents said someone had reached out to express support for their religion within the past year, compared to 37 percent in 2011 and 32 percent in 2007. Admittedly, these performances of allyship and optimism can be fraught; Muslims might prefer seamless acceptance to handshakes and earnestness from well-meaning neighbors.
Muslims are more likely than other Americans to believe that people who work hard can get ahead and succeed; 70 percent said they believe this is true. And 92 percent of Muslims say they’re proud to be Americans—roughly the same as the general public.
Although two-thirds of Muslims identify as Democrats, they may have more in common with other religiously orthodox Americans than secular liberals. Over the past decade, Muslims’ growing acceptance of LGBT people has roughly mirrored trends among Christians, even as both groups have been slower to support homosexuality than the general American public. According to Pew, Christians and Muslims are equally likely to attend worship services weekly and to say religion is important to them.
People feel an abiding sense of dread. Meanwhile, life basically continues as usual.
It’s not clear from this report that concrete experiences of discrimination have become more common under Trump, either. Experiences of most kinds of religious discrimination are roughly flat compared to rates reported in 2007 and 2011, when Pew previously surveyed American Muslims. Nineteen percent of respondents said they’d been called an offensive name in the past year, compared to 22 percent in 2011 and 15 percent in 2007, and the pattern and numbers were roughly similar for Muslims who said they’d been singled out by airport-security officials. Only 10 percent of respondents said they’d been called out by law-enforcement officials in the past year, down from 13 percent in 2011. And 6 percent said they’d been physically threatened or attacked, the same level of physical discrimination reported in 2011. Right now, it’s not possible to verify these reports against data like the FBI’s hate-crime statistics—the only real national system for tracking discrimination against religious minorities—since the Bureau’s data is currently only available through 2015.
What has gone up are Muslims’ reports of being “treated with suspicion,” Pew found: 32 percent of respondents said they’d encountered this within the past year, compared to 28 percent in 2011. This stat, more than any other, speaks to American Muslim life under Trump. People feel an abiding sense of dread, hostility, and discomfort. Meanwhile, life largely continues as usual.
Ultimately, perceptions matter. In April, I spent an afternoon following Asma Akhras, a 40-something Muslim woman who decided to run for local office for the first time in part because of the 2016 election. She described a feeling similar to how people sometimes talk about ambiguous gender bias: Is it sexism, or is it me? When she knocked on a door and an old man yelled at her, it was impossible to tell whether it was because of her hijab or because he was simply rude. In the end, it doesn’t really matter if social scientists can precisely measure what was going on in that interaction, or how Trump has changed the lives of Muslim Americans. It still ends up as a cloud of doubt over an otherwise placid suburban life.