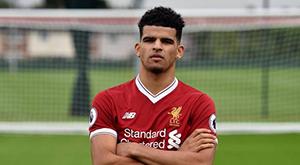 John Aldridge
Liverpool have been one of the quieter teams when it comes to doing deals in the transfer market this season.

But supporters of the club have no reason to be worried, or too worried at least. I trust this Liverpool manager more than some of the previous managers. He doesn’t panic, he is sitting back waiting for two more big deals to be done and he seems happy that they will be done.
I think most fans are hoping that one or both of the two big deals that are still in the pipeline for Liverpool, Virgil van Dijk and Naby Keita, the two they are really pushing for, will be done. I’d be happy with one, two of them would be tremendous.
Van Dijk would probably be more important to the team overall, though Keita could be a big player in the years to come.
It’s looking highly unlikely now that they will get in a striker, which I thought was main priority. The manager seems to be happy with the forwards that he’s already got, with Sturridge, Origi, Danny Ings coming back.
To me, Dominic Solanke is definitely one for the future, I have been really impressed with him, so it’s good from a Liverpool viewpoint to have him.
The club’s deals overall have been good but the Solanke deal is excellent. He’s very exciting, and if the fee involved is £3m, as we are told, then that’s a bargain, at Chelsea’s expense.
He could be a really big player in the future. He has everything you want in a striker, he’s big, physical, good in the air, has a good touch, knows his way to goal. He has everything and I am excited by him.
I’d be even happier with van Dijk and/or Keita but it’s not easy to get these players in now, it’s hard to prise them away and this takes patience, especially with Van Dijk and what happened a month or two ago.
Other clubs, especially Manchester City, are spending a lot of money but that shouldn’t panic the likes of Liverpool or Spurs into spending money on players they don’t especially want.
Jurgen Klopp knows what he wants and he wants quality, there’s no point in signing peripheral players just for appearances, you need to sign players who have that x-factor, and Van Dijk has that, he’s one of the best centre halves in the Premier League, Keita is possibly one of the best in Europe in his position.
You have to focus on them and not settle for second-best, which Liverpool have done in the past.
It’s a business now more than ever, when you can talk about €180 million for a player like Kylian Mbappe. For an ex-player of my era it’s crazy money but you have to pay crazy prices these days. Players are very powerful now. If they want to move they will move, if the likes of van Dijk want to force their way out, they can. Players are so strong now and contracts are not worth the paper they are written on.
Southampton know van Dijk is unhappy, Liverpool want him. So it seems van Dijk will move.
Herald Sport