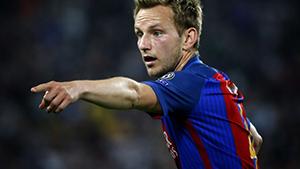 Manchester United have been given a fresh boost in their long-term pursuit of Gareth Bale, with Real Madrid coach Zinedine Zidane admitting he cannot guarantee the Welshman will stay at the Bernabeu this summer.

Liverpool are ready to make one last-ditch attempt to prise Naby Keita away from Germany.

Barcelona could tempt Liverpool into parting ways with Philippe Coutinho by using influential midfielder Ivan Rakitic as part of the deal.

AC Milan have spoken to Diego Costa’s agent this summer – but chairman Marco Fassone remains tight-lipped over a move for the Chelsea striker.

Manchester United are set to send scouts to Belgium to watch Anderlecht’s Leander Dendoncker in their Friday night season-opener.

Roma are set to return with a new £32m bid for Leicester’s wantaway winger Riyad Mahrez, after having an initial offer of £20m rejected.

Brighton are lining up a move for £8m-rated Leicester forward Tom Lawrence which could see them smash their club record for a second time this summer.

Left-back Alan Hutton has both Sheffield Wednesday and Sunderland chasing him.

Striker Nahki Wells has been told by Huddersfield boss David Wagner that he can leave the club.
THE SUN

Manchester City will be without new signing Benjamin Mendy for the start of the Premier League season after it was revealed he has been carrying an injury for eight months.

Barcelona target Paulo Dybala has poured cold water on talk of a switch to the Catalan giants by insisting he is happy at Juventus.

Tottenham will become the first Premier League club to trial safe standing with an area in the north stand of the redeveloped White Hart Lane.

Inter Milan manager Luciano Spalletti singled out the outstanding performance of Ivan Perisic in his side’s 2-0 victory over Bayern Munich – but remains unsure over his future.

Real Betis are hopeful of signing Middlesbrough’s Gaston Ramirez in a £4m deal.

AC Milan chief Marco Fassone has denied reports that his side are set to sign Renato Sanches, admitting that Bayern Munich’s asking price is too high.
THE INDEPENDENT

Chelsea are considering bids for Alex Oxlade-Chamberlain and Ross Barkley as Antonio Conte moves to boost his squad with English players.
DAILY STAR

Sunderland are leading the race for Aston Villa ace Tommy Elphick – but Leeds are also in the hunt.
DAILY EXPRESS

Liverpool are hopeful of keeping Philippe Coutinho out of Barcelona’s clutches this summer.
DAILY RECORD