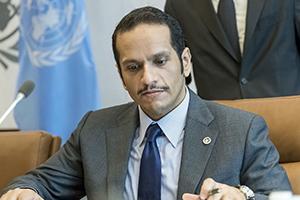 By Kambiz Foroohar
Qatar wants the United Nations to have a greater role in resolving its standoff with a Saudi-led alliance after U.S. and U.K. efforts to find a solution among the parties reached an impasse, Foreign Minister Sheikh Mohammed bin Abdulrahman Al Thani said.

After meeting UN Secretary General Antonio Guterres, Sheikh Mohammed blamed “the stubbornness” of Saudi Arabia, the United Arab Emirates, Bahrain and Egypt for the continuation of tensions. The dispute broke out in June after the four countries accused Qatar of backing extremism and imposed sanctions against Doha.
“It’s all about violation of international law and infringing the sovereignty of the state of Qatar,” Sheikh Mohammed told reporters at the UN on Thursday. “This is the right place where we have to start to seek our options” to find a legal solution, he added.
The remarks highlight that the gap between the two sides isn’t narrowing despite diplomatic efforts by the U.S. and the U.K. U.S. Secretary of State Rex Tillerson visited the region earlier this month but failed to secure a breakthrough, while U.K. Foreign Secretary Boris Johnson has also pressed for a diplomatic solution. “The dispute is at a standstill,” State Department spokeswoman Heather Nauert told reporters in Washington Thursday.
Both Qatari and Saudi diplomats have been privately lobbying UN Security Council members for support.
List of Demands
Under pressure from the U.S. to spell out specific grievances, Saudi Arabia presented a list of 13 demands for the Qatari government to meet to resolve the crisis, a move that was rejected. Later, the bloc offered six broad principles that it said Doha had to accept, including combating terrorism, and denying financing and shelter to terrorist groups.
Qatar denies supporting terrorism, and says the moves against it were an attempt by Saudi Arabia to impose its will on smaller nations in the Gulf.
Its ruler, Sheikh Tamim bin Hamad Al Thani, has said his country was ready to start a dialogue provided that its sovereignty is respected. Tillerson has called on the group to end the campaign as “a sign of good faith” and said the U.S was satisfied with Qatar’s efforts in implementing an anti-terrorism agreement signed during his Doha trip this month.
Qatar’s isolation has forced the world’s richest country on a per capita basis to open new trade routes to import food, building materials and equipment for its natural gas industry. It also triggered a rating downgrade of Qatar’s sovereign debt by S&P Global Ratings.