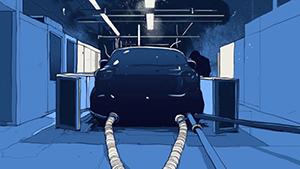 By Frank Dohmen and Dietmar Hawranek
The diesel scandal is not a failure on the part of individual companies, but rather the result of collusion among German automakers that lasted for years. Audi, BMW, Daimler, Volkswagen and Porsche coordinated their activities in more than a thousand meetings. The exposure of a cartel.