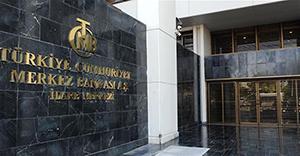 The Central Bank kept its main interest rates steady on July 27, in line with market expectations, noting that it would maintain its tight monetary policy until the inflation outlook improves significantly.

In a statement announcing its July monetary policy committee meeting results , the central bank said it would maintain its “tight” policy stance “until the inflation outlook displays a significant improvement.”

“Although recent improvements in cost factors and expected partial correction in food prices will contribute to disinflation, current elevated levels of inflation pose risks on the pricing behavior. Accordingly, the Committee decided to maintain the tight stance of monetary policy,” it noted.

“Inflation expectations, pricing behavior and other factors affecting inflation will be closely monitored and, if needed, further monetary tightening will be delivered,” read the statement.

“Domestic demand conditions have improved and demand from the European Union economies continues to contribute positively to exports. The economic activity is expected to maintain its strength due to the supportive measures and incentives provided recently. The Committee assesses that the implementation of the structural reforms would contribute to the potential growth significantly,” it said.

Meanwhile, the U.S.’ Federal Reserve kept interest rates unchanged on July 26 and said it expected to start winding down its massive holdings of bonds “relatively soon” in a sign of confidence in the U.S. economy.

The Fed kept its benchmark lending rate in a target range of 1.00 percent to 1.25 percent, as expected, and said it was on track to continue the slow path of monetary tightening that has lifted rates by a percentage point since 2015.

In a statement following a two-day policy meeting, the U.S. central bank’s rate-setting committee indicated the economy was growing moderately and job gains had been solid.

It also noted that both overall inflation and a measure of underlying price gains had declined – trends which have worried some policymakers – but that it expected the economy to continue strengthening.

“The committee expects to begin implementing its balance sheet normalization program relatively soon,” the Fed said, adding that it would follow a plan outlined in June to trim its holdings of U.S. Treasury bonds and mortgage-backed securities.

U.S. stock prices rose following the release of the policy statement while yields on U.S. government debt fell. The dollar dropped against a basket of currencies.

After pushing rates nearly to zero to fight the 2007-2009 financial crisis and recession, the Fed pumped over $3 trillion into the economy in a bond-buying spree to further reduce rates. Its balance sheet has grown to $4.5 trillion.