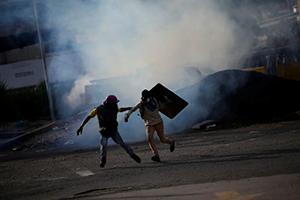 Alexandra Ulmer and Fabian Cambero
CARACAS (Reuters) – The U.S. government ordered family members of employees at its embassy in Venezuela to leave on Thursday as a political crisis deepened ahead of a controversial vote critics contend will end democracy in the oil-rich country.

Violence continued to rage on the street, with another seven people killed during the latest opposition-led strike against President Nicolas Maduro’s planned election for a powerful new Constituent Assembly on Sunday.
Adding to Venezuela’s growing international isolation, Colombian airline Avianca suddenly stopped operations in the country on Thursday due to “operational and security limitations”.
Maduro’s critics were planning to pile more pressure on the unpopular leftist leader by holding roadblocks across the nation dubbed “The Takeover of Venezuela” on Friday.
“We’re going to keep fighting, we’re not leaving the streets,” said opposition lawmaker Jorge Millan.
The government banned protests from Friday to Tuesday, raising the likelihood of more violence in volatile Venezuela. Many people have been stocking up food and staying home.
As well as ordering relatives to leave, the U.S. State Department on Thursday also authorized the voluntary departure of any U.S. government employee at its compound-like hilltop embassy in Caracas.
President Donald Trump has warned his administration could impose economic sanctions on Venezuela if Maduro goes ahead with the vote to create the legislative superbody.
The Constituent Assembly would have power to rewrite the constitution and shut down the existing opposition-led legislature, which the opposition maintains would cement dictatorship in Venezuela.
Over 100 people have died in anti-government unrest convulsing Venezuela since April, when the opposition launched protests demanding conventional elections to end nearly two decades of socialist rule.
Anti-Maduro Strike
Many streets remained barricaded and deserted on Thursday during the second day of a nationwide work stoppage.
Plenty of rural areas and working-class urban neighborhoods were bustling, however, and the strike appeared less massively supported than a one-day shutdown last week.
Demonstrators fire homemade explosive at a rally during a strike called to protest against Venezuelan President Nicolas Maduro’s government in Caracas, Venezuela July 27, 2017 .Ueslei Marcelino
With Venezuela already brimming with shuttered stores and factories, amid a blistering four-year recession, the effectiveness of any strike can be hard to gauge. Many Venezuelans live hand-to-mouth and say they must keep working.
In Barinas, home state of former Venezuelan leader Hugo Chavez, only about a third of businesses were closed according to a Reuters witness, as opposed to the opposition’s formal estimate of 90 percent participation nationally.
“I am opposed to the government and I agree we must do everything we can to get out of this mess, but I depend on my work. If I don’t work, my family does not eat,” said Ramon Alvarez, a 45-year-old barber at his shop in Barinas.
There has been widespread international condemnation of Maduro’s Constituent Assembly plan. The United States on Wednesday announced sanctions against 13 current and former officials for corruption, undermining democracy, and participating in repression.
Government officials and candidates for the Constituent Assembly wrapped up campaigning on Thursday with a rally in Caracas with Maduro.
The former bus driver and union leader reiterated that the assembly was the only way to bring peace to Venezuela, blasted threats of further sanctions from “emperor Donald Trump,” and hit back at accusations that he is morphing into a tyrant.
“The usual suspects came out to say Maduro had become crazy,” he told cheering red-shirted supporters in Caracas.
“Of course, I was crazy! Crazy with passion, crazy with a desire for peace.”
Amid rumors of 11th-hour attempts to foster negotiations, Maduro reiterated an invitation to dialogue with the opposition, although such talks have flopped in the past.
Deaths, Arrests
The state prosecutor’s office said four people died on Thursday amid the unrest: A 49-year-old man in Carabobo state, a 23 year-old in Lara state, a 29 year-old in Anzoategui state and a 16-year old in the middle class Caracas area of El Paraiso.
A 23-year-old man and a 30-year-old man were also killed in western Merida state and a 16-year-old boy was killed in the poor Caracas neighborhood of Petare during clashes on Wednesday.
This week’s death toll topped last week’s one-day strike, when five people were killed.
Over 190 people were arrested during the stoppage on Wednesday and nearly 50 on Thursday, said local rights group Penal Forum. Since April, authorities have rounded up nearly 4,800 people, of whom 1,325 remain behind bars, the group said.
Wuilly Arteaga, a violinist who has become one of the best-known faces of the protests, was among those detained by the National Guard, Penal Forum added.
Additional reporting by Deisy Buitrago, Brian Ellsworth, Alexandra Ulmer, Anggy Polanco, Andrew Cawthorne, Diego Ore, Corina Pons, and Girish Gupta in Caracas, Mircely Guanipa in Punto Fijo, Francisco Aguilar in Barinas, Maria Ramirez in Bolivar, Eric Beech in Washington D.C., and Julia Symmes Cobb in Bogota; Writing by Alexandra Ulmer and Andrew Cawthorne; Editing by Toni Reinhold, Andrew Cawthorne and Michael Perry