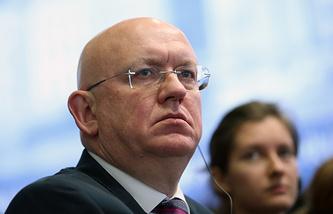 According to Haq, the meeting will be held before noon and will be available for media. This is going to be a protocol meeting, though “since this is a Russian ambassador they will have stuff to discuss,” he said, adding that the meeting will probably be held at around 10 am (5 pm NY time).
On Thursday, Russian President Vladimir Putin appointed Vasily Nebenzya to the position of the Russian Permanent Representative to the United Nations as a relevant decree was posted on the Kremlin’s website.
The position of Russia’s Permanent Representative to the UN was vacant after the death of Ambassador Extraordinary and Plenipotentiary Vitaly Churkin in New York in February.
On May 25, the State Duma (lower house of parliament) International Affairs Committee supported Nebenzya’s nomination to the position of Russia’s Permanent Representative to the UN. The Federation Council (upper house) International Affairs Committee discussed the issue on May 29.
Vasily Nebenzya, born in 1962, speaks English and Spanish. He served as the Head of the Russian Foreign Ministry’s Department for Humanitarian Cooperation and Human Rights and was senior adviser to the Russian Permanent Mission to the UN in 1996-2000. In 2006-2012, he served as Russia’s Deputy Permanent Representative to the UN Office and Other International Organizations in Geneva.