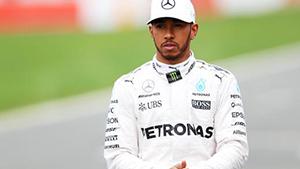 Hamilton could match Schumacher’s mark of 68 on Saturday but on Friday he insisted the feat was not on his mind despite being just one lap away from engraving his name into Formula One folklore.

Hamilton, a single point adrift of his title rival Sebastian Vettel in this season’s topsy-turvy title race, will earn his first shot at matching Schumacher’s incredible haul in qualifying.

He is 5/6 with Sky Bet to be the fastest qualifier and even money to win Sunday’s race.

In Hamilton’s corner will be the now uncustomary sight of his father Anthony after he arrived in the Hungaroring paddock on Friday. Hamilton Snr held three jobs to enable his son to go racing as a child and was key in his rise from the humble surroundings of Stevenage to global superstardom.

But he has become something of a peripheral figure on the Formula One tour in recent years and his surprise appearance in Hungary will mark his first grand prix appearance since he flew to Abu Dhabi on the morning of Hamilton’s 2014 title decider with Nico Rosberg.

Hamilton triumphed in the desert that evening to beat Rosberg and win the second of his three championships. The 32-year-old will hope the presence of his father will be something of a lucky charm here, too.

In truth, Hamilton does not need it. The 2.7-mile, twisty and undulating Hungaroring is a circuit where Hamilton has flourished and his winning record is unrivalled. He has won on five occasions, and been on pole there five times, too.

A sixth on Saturday would see Hamilton jointly crowned, statistically at least, as the fastest man the sport has ever seen over one lap.

“I can’t tell you what it’s going to feel like because I’m going to get that pole at some stage,” Hamilton said of Schumacher’s record. “Honestly I’ve not thought about it.

“I’d rather just wait until that moment. I’m sure it will be an incredible feeling, but I can’t tell you what I’m going to feel like. It’s like saying how are you going to feel on your birthday?”

Following the conclusion of Sunday’s race, the sport will head for its now traditional four-week summer break, and Hamilton will be in charge of the championship should he follow up his masterclass at the British Grand Prix with another victory. Hamilton took 19 points out of Vettel’s lead at Silverstone after the Ferrari driver suffered a penultimate-lap puncture.

“I’m just really grateful that it’s close,” said Hamilton as he reflected on his bid to win a fourth crown. “I’ve been 43 points down before, and I do not give up, but 20 points still felt like quite a decent gap.

“It’s not the most important thing to go away form here leading. It would be great, but there’s a long, long way to go and what happened at Silverstone just shows that it can shift.

“So, for me I’m just really focused on ultimately doing the best job I can and score the most points I can to make sure I remain in that fight and when push comes to shove, hope I’ve got the upper hand.”

Standing in Hamilton’s way of equalling Schumacher’s record could be the surprise figure of Daniel Ricciardo after the Red Bull driver topped both practice sessions on Friday.

Hamilton was only fifth in the day’s second running, but the Mercedes driver did not set a lap on the supersoft tyre – the fastest rubber available here this weekend.

Hamilton could be the only British driver on the grid next year with Jolyon Palmer’s future hanging in the balance. The 26-year-old did little to ease the uncertainty surrounding his seat after he lost control of his Renault and crashed out of practice.