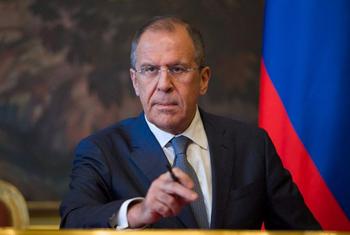 MOSCOW, /TASS/. Russian Foreign Minister Sergey Lavrov has stressed that Russia’s decision to equal the number of the US and Russia diplomatic personnel was triggered by a series of Washington’s hostile steps, the Russian foreign ministry said on Friday after Lavrov’s telephone conversation with US Secretary of State Rex Tillerson.
“Sergey Lavrov stressed that the decision to equal the number of US and Russian diplomatic missions and to close access to two US embassy’s facilities stems from a series of Washington’s hostile steps,” the ministry said. “Such actions included illegal sanctions against Russia, calumny against it, mass expulsion of diplomats and seizure of our diplomatic property.”
Lavrov told Tillerson that Russia was still ready to mend relations with the United States, but based on the mutual balance of interests. “Lavrov reiterated that our country was still ready for the normalization of bilateral relations with the United States and cooperation on the key issues of the global agenda,” the spokesman said. “However, it is possible only basing on equality, mutual respect and balance of interests.”
The spokesman added that Lavrov and Tillerson “agreed to maintain contacts on the whole scope of the Russian-American relations.”
The Russian minister stressed that Russia “has been doing its best to mend the relations and acted with discretion in response to the US’ provocations.” “But the latest developments have demonstrated that the US’ policy turnout out to be in the hands of Russophobic forces that are pushing Washington towards confrontation,” the ministry said. “Our limited and absolutely adequate measures should not be seen as an ‘eye for eye’ response but as a forced step fitting into the international practice and aiming to defend Russia’s legal interests in a hope that the US side would finally think about pernicious consequences of its policy.”