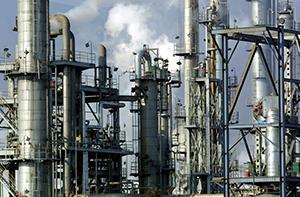 Steam rises from the China Petroleum and Chemical Corporation (Sinopec) oil refinery on the outskirts of Beijing, China Friday, January 17, 2003. Shares of China Petroleum & Chemical Corp., China’s biggest refiner, may outpace those of PetroChina Co., the nation’s largest oil producer, as investors such as Liu Yang hedge against falling oil prices.
Photographer: Kevin Lee/Bloomberg
Representatives of some OPEC and non-OPEC nations will meet in Abu Dhabi as soon as next week to discuss why some of them are falling behind in their pledges to cut production, people familiar with the matter said.
The meeting, co-chaired by Kuwait and Russia, will examine reasons why some countries aren’t fully implementing their cuts, the people said. Some nations will argue that the independent sources used by OPEC to assess compliance overestimate their production, said two of the people, who asked not to be identified because the discussions aren’t public.
Targets for output reduction are based on production estimates from six independent parties, known as “secondary sources.” Last year, as the deal was being negotiated, Iraq complained about these estimates, claiming they aren’t accurate. Other members of the Organization of Petroleum Exporting Countries are also putting the blame on secondary sources for their poor performance, said two people.
The agreement, which came into effect at the start of the year, brings together OPEC and non-OPEC nations in an effort to take as much as 1.8 million barrels of oil a day off the market. While compliance was high in the first months of the pact, it began to slide as the expected crude-price recovery failed to materialize.
Some non-OPEC nations have been invited to the Abu Dhabi meeting but have yet to confirm their presence, one of the people said. OPEC members Algeria and Venezuela — who sit on the committee that oversees compliance — won’t attend, two people said. Algeria’s implementation so far this year was at 70 percent, while Venezuela’s averaged 39 percent, according to the International Energy Agency.
Mounting Pressure
Saudi Arabia, OPEC’s biggest producer and its de-facto leader, said this week it planned to step up pressure on nations that aren’t complying with their commitments. The following day, the U.A.E., another country which hasn’t fully implemented its own cuts, pledged further reductions from September.
Iraq, the second-biggest producer in OPEC, will also attend the meeting, the people said. It has previously argued that it should have been excluded from cuts because of its battle against Islamic State. OPEC nations Libya and Nigeria have been exempted as they try to restore production curbed by internal conflict, and Iran, freed from international sanctions, has also been permitted to increase output.
Iraqi compliance slumped to 29 percent in June, its lowest so far, while the U.A.E. made just 60 percent of its cuts, according to the IEA’s last monthly report. Overall implementation weakened to 78 percent from 95 percent in May after members including Saudi Arabia boosted output.
While OPEC’s June compliance slipped to its lowest, the average rate during the first six months of the pact was 92 percent, which is “still strong by historical standards,” the IEA said.