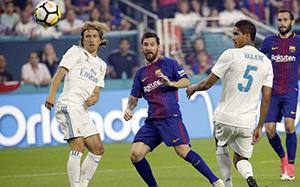 Barcelona drew first blood against Real Madrid ahead of the new season with a 3-2 victory in a pulsating Clasico friendly on Saturday in Miami.
The historic rivals will meet again twice in August in the Spanish Super Cup and this International Champions Cup match set the entertainment bar high, with Gerard Pique’s strike settling a fiercely contested clash.
Madrid were missing Cristiano Ronaldo, still on holiday, but both teams were close to full strength. Ernesto Valverde, getting a taste of Clasico drama early in his career as Barcelona manager, selected Neymar despite speculation swirling over the Brazilian’s future at the club.
However, it was stalwart Lionel Messi who opened the scoring after just three minutes, beating Luka Modric and firing home, with his strike deflecting off Raphael Varane and beating Keylor Navas.
Barcelona were dominant and Ivan Rakitic doubled their lead with a powerful drive when Suarez helped force Neymar’s low cross to the Croatian midfielder on the edge of the box.
The sell-out crowd at the Hard Rock Stadium were in for a thrilling night and Madrid fought their way back into the game with Mateo Kovacic drilling expertly past Jasper Cillessen from the edge of the area.
Marco Asensio, starting on the left of Real Madrid’s attack in place of Ronaldo, then started and finished a lightning break to tie the game in the 36th minute.
After a prolonged halftime break with music, lights and fireworks shows more akin to the Super Bowl, the game restarted at the same hectic pace.
Pique sent Barcelona ahead again in the 50th minute by flicking home Neymar’s curling free-kick, before the Brazilian missed from close range. Luis Suarez was denied by Navas and Samuel Umtiti had a strike cleared off the line.
Barcelona were dominant and determined not to let their lead slip, with Rakitic even squaring up to referee Jair Marrufo as he protested a decision, showing the stakes were much higher than for a regular friendly.
It was the first time the teams met in a friendly since 1991 and only the second time outside of Spain. Given its success, the spectacle is likely to be repeated.