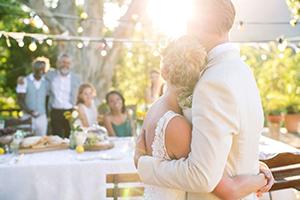 Caitlin Flynn
Research has consistently shown that married people are healthier than singles. But in recent years, the link between health and marital status has weakened and a new study published this month in the journal Social Science Quarterly suggests that it no longer exists at all.

The study’s author, Dmitry Tumin, a sociology researcher at Ohio State University, compared married people born between 1955 and 1984 and found that health benefits have deteriorated over time. Married people only exhibited health benefits if their union lasted 10 years or more, and the effect was “completely attenuated among women in the youngest birth cohort.”
Advertisement
Meanwhile, the youngest unmarried group didn’t experience any protective effect compared to their wedded counterparts.
Although Tumin’s study indicates the tide is shifting, the next question to explore is why. It’s possible that the link between health and marriage was never as strong as previous studies suggested. Scholars are using increasingly sophisticated methods in order to eliminate potential confounding factors.
Tumin says another possibility is that his research “may reflect demographic and cultural trends that have undermined the protective effects of marriage.”

People are marrying later in life, and more Americans than ever are opting to never tie the knot at all. There’s also been a shift in where people seek social and economic support. Instead of looking to a spouse, many people are saving money by living with their parents or roommates for longer.
Singleness is also becoming less stigmatized. And unmarried people, especially women, have experienced an increase in economic freedom over the past few decades. In the past, married women’s health may have been the result of economic security provided by marriage. Now, it’s something that we can more easily attain on our own.
Furthermore, Tumin says it’s possible that marriage has become more stressful in recent years.
“Work-family conflict has increased in the closing decades of the 20th century, and spouses’ actual time spent together has decreased over this period,” Tumin wrote. “Against a backdrop of greater demands at home and at work, and less time spent together, today’s married couples may indeed experience marriage more as a source of conflict and stress than as a resource that safeguards their health.”
He also points out that marriage rates have declined among people of lower socioeconomic status, which could skew the new data.
“It may be the case that in the most recent birth cohorts, when only the most affluent people marry, there could be little change in health after getting married because the health of people who marry is already very good before marriage,” Tumin explained.
But if you genuinely love the single life (as plenty of people do), this new research indicates that your health isn’t doomed simply because you don’t want to marry.
Sociologist Bella DePaulo, who specifically studies single people, put it best: “It’s just ridiculous to think that single life is…a life of sadness and bad outcomes.”
Advertisement