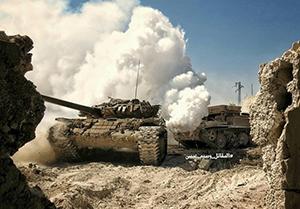 TEHRAN (Tasnim) – Syria’s army and its allies on Saturday reached the edge of al-Sukhna, the last town held by Daesh (ISIL or ISIS) in Homs province and a key step in their multi-pronged offensive against the Takfiri militants, a report by a Hezbollah-run media unit said.

Sukhna is on the main desert highway between Palmyra and the government’s besieged enclave at Deir ez-Zor, about 130km to the east.
The Hezbollah media unit earlier said the Sukhna gas field and heights above the town were within range of the army and its allies’ fire, Reuters reported.
The so-called Syrian Observatory for Human Rights also reported that the army had similar fire control across the whole town and that most Daesh militants there had fled.
The army and allies, including Lebanon’s Hezbollah resistance movement, are pushing through Syria’s eastern desert to assault Daesh’s heartland along the Euphrates valley.
Another prong in the offensive is being waged further north, where the army and its allies are advancing along the southern bank of the Euphrates south of Raqqa. Russian jets are supporting the campaign.