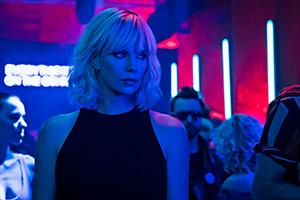 Arianna Davis
An undercover MI6 agent is sent to Berlin just before the fall of the wall in 1989 to find a mysterious list of double agents. Sounds like yet another James Bond flick, until you see that the action hero in Atomic Blonde is Charlize Theron as the super-skilled, stylish renegade Lorraine Broughton. To be clear, it’s not just her gender that makes this different from your typical glossy spy thriller. The fight scenes are way more brutal.

I love that you’ve been very vocal about the representation of women in Hollywood, and we’ve made some strides this summer with movies like Wonder Woman, Girls Trip, and now Atomic Blonde. But we also still have a long way to go when it comes to ethnic and racial diversity. What are your thoughts on how your industry can improve there?
“It’s something we have taken very seriously for the last 15 years at my production company. We have really fought the fought. We have a film coming out next April that I produced called Gringo, and we put David Oyelowo as the lead action star, and that was something nobody could wrap their heads around. But he’s so incredible in the film. It’s just something we have to start thinking of, casting any and everyone, and not just this compartmentalized thing. In many ways, what I did in Atomic Blonde was just reminding people that hey, you could gender swap those male spy roles. They don’t have to always be men. The same goes with skin color, too. We’re going to have to wrap our heads around considering all races and genders for any role, because society is done with how it’s been going. We all want to see a real reflection of ourselves.”
Advertisement
You have two young children. How are you instilling the same messages you’re passionate about at work into their lives?
“I’m going to hopefully live my life in a way where my life will be enough for them to learn by example. I’m also always driving in the car with them and telling them they can be anything. And they’re like, ‘Yeeees, mom. We get it.’ They’re smart. They do get it. But I think in the long run, the things that stick with children are how the people around them live. I hope that my children can one day look at my work, my philanthropy, and the things I stood for and realize it wasn’t just me in the car telling them that they could be anything and annoying the shit out of them. It was also me actually living my life that way.”
You’ve been in this industry for a long time. What’s the one question you wish interviewers would stop asking you?
“I make fun of it and I don’t hide behind it, but I wish we didn’t always have to mention a woman’s age. Every single interview I’ve ever read of myself always has my age in brackets right next to it. I don’t see a lot of guys getting that same treatment. So I wish that we lived in a society where we’re not so age obsessed and we could actually just appreciate a person for who they are. And leave it at that.”