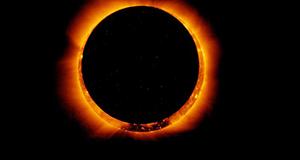 The total solar eclipse that will sweep across the entirety of the continental United States on August 21 has the country’s emergency services officials bracing for impact.

The celestial event, the first of its kind in nearly a century, has so many stargazers hyped up that disaster-level preparations are being made to ensure that the swarms of travelers expected to concentrate in the prime viewing areas will be safe, Newsweek reported.
The total eclipse will last just two minutes, but it’s already being touted as the event of the century. As many as 7.5 million people are predicted to pack into a 70-mile band that stretches from Oregon to South Carolina — the path of the total eclipse’s shadow.
Visitors are expected to clog interstates and local roads for days before the event, Brad Kieserman, vice president of disaster operations and logistics for the American Red Cross, told Newsweek. He compared it to the rush during emergency evacuations.
And once all the amateur astronomers arrive, they’ll need food and water, lodging and restrooms. Officials are bracing for toilet shortages, cellular blackout zones and the potential for emergency service vehicles to be stuck in traffic.
The state of Oregon, for instance, with a population of 4 million people, is expecting at least 1 million visitors. Officials in Kansas City, Missouri, directly in the path of the eclipse, are preparing as they would for a nightmare blizzard, according to Kieserman. Grand Teton National Park in Wyoming is bracing for “their busiest day in history, meaning past or future,” said Kathryn Brackenridge, a specially-appointed “eclipse coordinator” in Jackson, Wyoming. Hundreds of extra portable toilets have been rented there to accommodate the influx of visitors.
“Some of these places are never going to see traffic like this,” Kieserman said.
Hotel rooms in the path of totality were already sold out in June, and what Airbnb rentals do remain are now going for a premium — as high as $1000 per night in some places.
That doesn’t just pose a problem for eclipse fans who waited until the last minute to book their trips. The Red Cross regularly gives victims of fires and other home disasters hotel vouchers so that they will have some place to go.
“You’re not going to have hotel space in most of these places,” Kieserman lamented, according to Newsweek. “So where are these people going to stay?”

An advertisement for a festival built around the Aug. 21 total solar eclipse sits alongside a busy road leading into Madras, Oregon on June 13, 2017. The first place to experience total darkness as the moon passes between the sun and the Earth will be in Oregon and Madras, in the central part of the state, is expected to be a prime viewing location. Up to 1 million people are expected in Oregon for the first coast-to-coast total solar eclipse in 99 years and up to 100,000 could show up in Madras and surrounding Jefferson County. Officials are worried about the ability of the rural area to host so many visitors and are concerned about the danger of wildfire from so many people camping on public lands.
Hundreds of emergency shelters are being prepared in the 12 states that will be hardest hit by eclipse travel — should an earthquake or a serious heat wave or a hurricane hit in the week of the eclipse madness, he said, the Red Cross will be prepared.
But medical officials are concerned that traffic could keep deliveries of medicine and other urgent supplies from getting where they need to go, and so hospitals are stocking up on emergency supplies to prevent disaster.
Cellular service towers, not designed to handle the capacity of an additional million people per state, are likely to become overloaded, meaning hospitals will turn to landlines and beepers — how very 1997! — if doctors need to be reached.
Officials are warning eclipse travelers to come prepared, by packing emergency food and water in case roads become impassible and bringing paper maps as online GPS apps will likely stop working in areas with massive crowds. Travelers should also not count on finding lodging last-minute; the unprepared could easily find themselves sleeping in their cars.