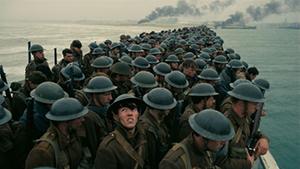 After an intense battle for No. 1, Warner Bros.’ Dunkirk gained yardage away from Sony Animation’s The Emoji Movie with the Christopher Nolan WWII epic taking the top spot with $28.1M after a $11.3M Saturday that was +41% over Friday. That number reps a -44% hold for Dunkirk in weekend two. Once again, never bet against Nolan.

Imax pumped 22% of Dunkirk‘s North American weekend with $6.2M from 403 auditoriums. Seventeen of the top 20 domestic runs were Imax venues. Twenty-two percent of Dunkirk‘s $102.8M stateside cash came from Imax natch, as Nolan shot a bulk of the movie in that format. Dunkirk will have the full the large format exhibitor’s domestic supply of screens next week.
The Emoji Movie declined 14% between Friday and Saturday from $10M to $8.7M putting its opening for this $50M budgeted toon at $25.6M. Typically, animated titles see a spike on Saturday due to family matinees and it’s likely bad word of mouth off the pic’s B CinemaScore (very low for an animated title which typically earn As or A-, no matter how hokey they are) and 8% rotten reviews are impacting Emoji. Nonetheless, Sony got this pic to open at this level with all that baggage in this Rotten Tomatoes era and that should be noted, not to mention Emoji is based on a source material mobile concept that lacked any kind of depth or universe. Working in Emoji‘s favor is its late July date and the fact that there are no other major studio animated pics in the marketplace. Those under 18, 50% of Emoji‘s crowd, gave the movie an A-, which also points to where dollars are coming from. The last animated release to receive a low CinemaScore was 20th Century Fox/DreamWorks Animation’s Captain Underpants with a B+ (though critics embraced it with a certified fresh 86% Rotten Tomatoes score). That pic opened to $23.9M and turned around a 3x multiple for a current running domestic B.O. of $72.4M. Sony is hoping for the same multiple.
“It’s great when critics and audiences are in sync, but The Emoji Movie reached its intended audience and we’re thrilled that they have spoken and made it a family event

Greenstein gave a shoutout to Sony’s domestic marketing presidents Christine Birch and Andre Caraco for delivering the goods this weekend with Emoji Movie. The campaign obviously tapped the mobile app world, Emoji’s birthplace and stomping ground, with unique executions among key app partners including an “Emoji Match” Playlist on Spotify, augmented reality execution on Shazam, and a themed custom level on Just Dance. The studio also took advantage of these key partners’ social accounts when dropping trailers and exclusive content.

Similar to how Sony conjured up Smurf day as a holiday, so they declared July 17 as World Emoji Day whereby the pic’s voiceover cast appeared on Good Morning America, Today, Live with Kelly and Ryan, and Late Night With Seth Meyers. On that day, the cast also rang the NY Stock exchange closing bell and lit the Empire State Building in yellow in honor of Emoji Movie and its partnership with Girls Who Code (a non-profit that seeks to educate and inspire tech skills in teenage girls). Sony went market to market with their walk-about characters from the movie, along with a mobile truck activation which created and co-opted events at each stop. Also, remember, voiceover star T.J. Miller parachuted into the Cannes Film Festival.
The TV push for Emoji reached every demo of the family audience with custom vignettes across the Nickelodeon networks, Disney XD, Cartoon Network, Freeform, Hallmark, OWN and TBS. On Univision/Unimas there was a multi-phased partnership that aired over the last three months with in-show integrations, unique content and sneak peeks inserted into top-rated programming like Premios Juventud, La Reina de la Cancion, Despierta America and CONCACAF Gold Cup. Plus, weekly custom “Emoji-Minute” segments throughout. There was the custom-made spot “The Real Emojis of Textopolis” featuring film characters playing off the iconic Housewives introduction on Bravo.
Still with all this marketing muscle behind Emoji Movie, it would be interesting to see how much higher this animated film could have opened if a universally appealing and critically acclaimed movie was crafted. Because when an animated movie has that groundswell (read Illumination Entertainment titles), audiences don’t hold back their bucks.
Focus Features/Sierra Affinity’s Cold War spy movie Atomic Blonde is turning in a solid $18.6M at 3,304 venues in fourth. The Charlize Theron action title dipped on Saturday to $6.5M from Friday’s $7.1M, but remember opening day was boosted by $1.5M in previews. Audience make-up is next to even with 51% guys to 49% women. Sixty-two percent were over 25. Atomic Blonde‘s opening reps the fourth-best debut for Focus Features after 2015’s Insidious: Chapter 3 ($22.7M ), last year’s London Has Fallen ($21.6M) and 2008’s Burn After Reading ($19.1M). “We’ve been able to hit female empowerment in the movie industry and bring females in the spotlight whether it’s onscreen or behind the camera,” said Focus Features distribution chief Lisa Bunnell about Focus’ recent specialty streak that also includes Cannes best director winner The Beguiled from Sofia Coppola and Niki Caro’s The Zookeeper’s Wife. “This is the time period for an edgy sensual thriller,” added Bunnell about the upcoming August play period, “A movie like this will take on new life and can have legs. It’s the reason why we opened here; you can play through Labor Day.” Atomic Blonde received an overall 73% positive score with a 52% definite recommend per ComScore/Screen Engine’s PostTrak. Focus took domestic on Atomic Blonde (license,not equity stake) at Cannes two years ago with Uni taking two-thirds of the world. Sierra Affinity financed this $30M pic via presales and bridge financing.
Universal also had a fantastic weekend with its R-rated African American comedy Girls Trip which registered a 36% dip for $20M in weekend two and a 10-day total of $65.5M. This week it will become director Malcolm D. Lee’s highest grossing movie at the domestic B.O, surpassing The Best Man Holiday ($70.5M).