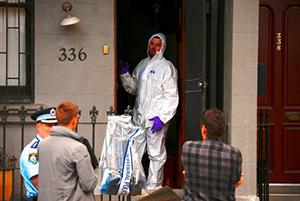 Rod McGuirk
Australian police disrupted a plot to bring down an airplane and arrested four men in raids on homes in several Sydney suburbs, the country’s prime minister said yesterday.

Malcolm Turnbull said security has been increased at Sydney Airport since Thursday because of the plot. The increased security measures were extended to all major international and domestic terminals around Australia overnight.
“I can report last night that there has been a major joint counter-terrorism operation to disrupt a terrorist plot to bring down an airplane,” Mr Turnbull said. “The operation is continuing.”
Seven Network television reported that 40 riot squad officers wearing gas masks stormed an inner-Sydney house before an explosives team found a suspicious device.
Australian Federal Police commissioner Andrew Colvin declined to say whether a fully equipped improvised explosive device had been found.
None of the four suspects arrested in five raids had been charged, Mr Colvin said. None worked in the airport industry.