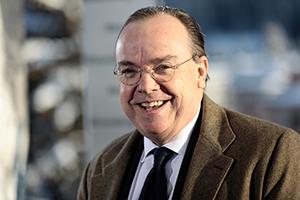 Adjusted pretax profit rose 13 percent to $6 billion from a year earlier, Europe’s largest bank said in a filing Monday. Profit at its three biggest units jumped, led by a 31 percent gain in global banking and markets. The bank’s stock jumped 2.9 percent in Hong Kong to the highest intraday level since November 2014.
“We’ve got revenues heading in the right direction across all our major businesses and regions,” HSBC’s Finance Director Iain Mackay said in a phone interview with Bloomberg Television’s Manus Cranny. “Good credit control and good cost control and a very strong capital position.”
The new buybacks, to be completed by December, will add to the $3.5 billion of repurchases since last year that have helped push the lender’s stock up more than 50 percent in the past 12 months. Gulliver’s attempt to turn around the bank in the wake of scandals and financial fines has been stymied by a failure to boost revenue. Rising interest rates around the world are now making that task easier.
Mackay has previously said as much as $8 billion could be repatriated from its U.S. operations and a portion of this would be allocated to buybacks. HSBC’s North American unit passed a Federal Reserve stress test in June, clearing the way for more than $3 billion of capital to be returned to shareholders, analysts said at the time.
The firm’s pretax profit exceeded the $5.5 billion average estimate of five analysts compiled by Bloomberg. Revenue in the quarter rose 4 percent to $13.2 billion, also beating analyst forecasts.
“We believe the key market focus will be on the improved revenue and capital formation trends,” Goldman Sachs Group Inc. analysts wrote in a note. The brokerage raised its 2017-2020 earnings per share estimates by 4 percent to 5 percent.
Here are other key second-quarter figures reported by HSBC:
• Reported pretax profit climbed 46% to $5.3 billion from year earlier
• Adjusted costs dropped 3% to $7.4 billion
• Common equity Tier 1 ratio 14.7% versus 12.1%
• Average 1st-half return on shareholders equity 8.8% versus 7.4%
• 1st-half dividend 20 U.S. cents unchanged from year earlier
“We have had an excellent first half of 2017,” Gulliver said in the statement. “We remain on track to complete the majority of our strategic actions by the end of the year.”
The CEO is seeking to jump-start growth after five years of declining revenues and several costly misconduct scandals. He has spent most of his tenure attempting to improve profitability by shrinking HSBC’s vast global network, exiting almost 100 businesses and 18 countries.
The bank’s incoming Chairman Mark Tucker, who succeeds Douglas Flint in October, is already considering internal and external candidates to replace Gulliver, who is due to retire next year, a person familiar with the matter said earlier this month.
— With assistance by Russell Ward