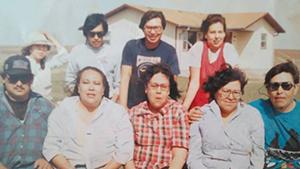 Four Sioux from South Dakota have spent the last 23 years in prison, convicted of raping their nieces. Although witness statements were withdrawn, they have never been acquitted. This apparent miscarriage of justice is rooted in a climate of prejudice against Native Americans.

Donovan Rouse committed suicide on April 12, 2017, after 23 years of drowning his sorrows and fighting his demons. He’d tried before, once slitting his wrists and once stabbing himself in the neck with a pair of scissors. Those times, he survived. But on a gray Sunday in April, he took an overdose of pills and silenced his demons forever.

The demons’ name was guilt.

At the age of nine, Donovan helped put four of his uncles behind bars. Desmond and Jesse Rouse, Garfield Feather and Russel Hubbeling, who belong to the Yankton Sioux tribe, went on trial in South Dakota in 1994, charged with repeatedly and brutally raping Donovan’s sisters and cousins — five girls, aged between 20 months-old and seven.

All four continue to this day to proclaim their innocence. In October 1996, Donovan and his cousin Thrista admitted to having fabricated the charges against their uncles. All the children who gave evidence went on to retract their statements.

“It was a big old lie,” said Donovan.

“They was (sic) asking a bunch of questions and I didn’t know what to say,” says Thrista. “So I just made it all up!”

All the appeals were rejected. At a hearing in 2001, the court refused to recognize that the children’s statements had been revoked. The four men remain behind bars and the state of South Dakota still maintains they are guilty.

But recent expert reports raise serious doubts about the court ruling. Moreover, the investigators’ methods, the questioning of the children and the fact the doctors who examined them were apparently not qualified, all add up to a grave miscarriage of justice — one that began in 1994 and has yet to be resolved.

The case has been picked up by the Innocence Project of Texas, which provides assistance to citizens convicted of crimes they did not commit. “The trial was very unfair,” says lawyer Mike Ware. “Inaccurate information was presented as facts in order to get a conviction.”

After a number of transfers, Desmond Rouse is currently in the Federal Correctional Institution in Englewood, Colorado. It’s a low-security jail, and he appreciates every ounce of freedom conceded to him. “I can see the mountains. I can even hear the birds singing,” Rouse wrote in an email to DER SPIEGEL.

Garfield Feather has been held in nine federal prisons and spent most of that time in solitary confinement — for his own protection. Someone like him, sentenced for child rape, is considered the lowest of the low in the prison hierarchy. “I am very fortunate to be here today,” he says when asked how he’s treated by other inmates.

Mike Ware was the only attorney willing to take on the case. It’s a child abuse case. There is no DNA evidence that could exonerate the men. They are all Sioux, and the sorry truth is that US society cares little for their fates. Getting them out of jail is no easy task.

In the Rouse case, prejudices against Native Americans surfaced during the trial time and again. The state prosecutor painted them as hardened alcoholics, while the court marshals told passersby ahead of the judges’ ruling that they were “just some guys going to the pen for rape” During their deliberations, the unanimously white jury apparently made racist jokes, although they later denied having done so.

“It was like the deep South against the blacks,” says psychologist Hollida Wakefield, who followed the trial in 1994.

It all began when 5-year-old Rosemary Rouse was taken into state care on Nov. 8, 1993, after complaining that her grandmother, with whom she lived, was mean and didn’t feed her. No one took a statement from her grandmother, who was accused of neglect.

Neglect is a common charge leveled against indigenous families in South Dakota when their children are taken away by social services. While cases of neglect obviously do exist, it is also fair to say that, in those days, social workers often lacked the training and sensitivity to understand family structures in Native-American tribes. The social worker in the Rouse case had previously worked in a casino.

The federal government passed the Indian Child Welfare Act (ICWA) in 1978 to protect Native-American families. It states that Native American children removed from their families should be placed with relatives, members of its tribe or of other indigenous tribes rather than in a Caucasian foster home.

But for years, South Dakota has failed to abide by ICWA. The state sweepingly labels Native-American children as having “special needs.” This in turn helps the state to cash in on significant extra payments from the federal government in Washington to the state and foster families who provide care for special needs children. “South Dakota has an outstanding level of ICWA misuse,” says Patricia Shiery. As a state legislator at the time, she made a futile attempt in 2011 to revise the “special needs” passage in the ICWA to reduce the negative impact of the foster care incentive on Native-American families.

Did this background play a role in the investigations against the Rouse clan?

Two months after Rosemary was removed from her grandmother’s care, her foster mother Donna Jordan told authorities that she believed the girl had been sexually abused. Days later, on Jan. 11, 1994, social workers, officers with the Bureau of Indian Affairs Police and FBI agents paid a visit to the Yankton Sioux reservation and removed 11 children from the care of the Rouse family, including Donovan, his siblings and his cousins.

Rosemary, Lucritia, Jessica, Fury, Thrista and Echo Rouse, accompanied by their foster mother, were only examined by pediatrician Richard Kaplan four days later. Almost all the girls accused an uncle of having molested them. Kaplan found evidence of slight bruising and redness but was unable to diagnose clear-cut sexual abuse. He referred the girls to a colleague.

On Feb. 11, 1994, gynecologist Robert Ferrell performed colposcopies, a procedure to examine an illuminated, magnified view of the cervix and the tissues of the vagina and vulva. The doctor failed to take any photographs during the examination. In court, he resorted to sketching the children’s genitals to explain his conclusions.

Ferrell found notches, furrows and lines on the girls’ hymens, which he took to be traces of earlier injury. He described “abnormal-looking hymens” and small tears that had healed on the girls’ rectums as well as thickened wrinkles.

During the trial, Ferrell admitted that none of his findings, taken in isolation, sufficed as evidence of sexual abuse. The judge refused the defense’s request that the children be examined by a specialist.

In 2014, Joyce Adams, a doctor who specializes in child abuse, wrote a report on Ferrell’s diagnosis, describing his findings as within the span of normal anatomical structures. Adams has examined over 3,500 children and given evidence in more than 400 court cases. “If the medical evidence of Dr. Ferrell was given any weight by the jury in its deliberations, then these cases must be reassessed,” she says.

The only evidence that still points to the men’s guilt are the children’s own testimonies. But new reports suggest that these were obtained under duress. The children were questioned at least three times by investigators and in the state prosecutor’s office. They saw a therapist twice a week. In total, from the start of the investigation in January 1994 until the trial in July, they would have talked about the alleged abuse more than 25 times. All the while, they were completely isolated from their family.

“Tell us the truth. You can go home if you tell us the truth,” was the message conveyed during their questioning, as Donovan and Lucritia would recall in subsequent years. The investigators showed them explicit anatomical pictures, the therapist gave them dolls so they could reconstruct what had happened. The accusations escalated with every session, with the children saying their uncles had raped their mothers, they had beaten up their grandmother, broken her arm. They even claimed their grandmother had touched them inappropriately.

“Lays think of memory as a cam recorder where you just hit the replay button and see everything that happened,” says psychologist Hollida Wakefield. “That’s a totally erroneous idea.” As she points out, an experience is reconstructed afresh, each time a person recalls it. “It’s a reconstruction, a process in motion and influenced by many things such as our own reflections and reactions of our peers,” she says. Repeated questioning creates a sense of pressure and impairs memory, especially in cases of children who are interrogated without a trusted adult present.

Child psychologist Maggie Bruck teaches at John Hopkins University. She has conducted numerous studies on the suggestibility of children and their credibility as witnesses. In her opinion, the Rouse children’s statements were influenced by “highly suggestive circumstances that have been scientifically shown to lead to false accusations by young children.”

Therapy notes also show that when the children took part in group sessions, it was striking that they made the same accusations as one another. Experts call this “cross-germination.” When witnesses listen to other witnesses’ statements, they can develop false memories. In 1994, the children’s psychologist in the trial said she was only familiar with the term in the context of gardening.

During the trial, the state prosecutor asked the children “yes” or “no” questions. The defense was not allowed to challenge the children over contradictions in their statements. Donovan burst into tears in the witness box and went into shock. “I was so ashamed to lie in front of my uncles,” he would later say.

Attorney Mike Ware is seeking to have the case reopened and wants to see the mens’ full acquittal. In late April, for the first time, he visited Desmond Rouse in prison in Colorado.

After 23 years behind bars, he and the other three have grounds to be hopeful. Despite everything, they bear no grudge against the children. “My heart aches for what those children were put through by the federal authorities involved,” says Garfield Feather. “So many lives were destroyed.”

They were devastated to learn of Donovan’s suicide. “His death leaves a empty space in my heart,” says Desmond Rouse.

After Ware’s visit, he wrote to DER SPIEGEL that he was optimistic that things might start to change for him and the others. But his experience with the U.S. justice system has left him traumatized. “I believed in truth and justice back then, ” he wrote. “But after all that we’ve been through, I don’t believe in it anymore. In America, truth and justice exists for some, but not for everyone.”
URL: