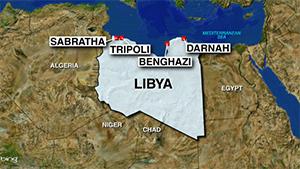 As the Islamic State terror network loses territory across Iraq and Syria, analysts and experts assert that the terrorist outfit is increasingly capitalizing on the chaos of Libya, positioning the country as its point of resurgence.
The black-clad jihadist outfit is believed to be regrouping and recruiting in the rural regions south of the main east-to-west coastal highway and in the far-west town of Sabratha, which is poised just 60 miles from the Tunisian border, since being run out of its Libyan “caliphate” capital of Sirte late last year.
“The majority of their fighting force comes from Tunisia, so Sabratha is also a growing center,” prominent terrorism analyst Robert Young Pelton told Fox News. “ISIS in Libya can regenerate quickly.”
Col. Ahmed Almesmari, spokesperson for the self-styled Libyan National Army (LNA), told Fox News that ISIS first appeared in Libya at the end of 2013, even before its dominance in Iraq, borne out of “Muslim Brotherhood-affiliated militias” and Al Qaeda dissidents in Libya’s eastern port city of Derna near the Egyptian border.
But over time, ISIS has seemingly moved its operatives from the eastern Egyptian border and now appears to be clustering closer to the western Tunisian side. According to Almesmari, the terror faction has recently established camps around 25 miles east of the town of Bani Waleed, as well as south of Sirte.
Mohamed Ghasri, spokesperson and senior commander of the Mistrata-based al-Bunyam al-Marsous militia, which waged bloody battles with ISIS fighters in Sirte, stated last week that they too have observed movements by the group south of Sirte, where they are “trying to regroup and break through our forces’ lines in the south.”
Joseph Fallon, Islamic Extremism expert and U.K. Defense Forum research associate, concurred that “ISIS has retreated south of Sirte to regroup” and that its global threat cannot be underestimated.
“Here, it can jeopardize western interests through guerrilla warfare sabotaging Libya’s oil facilities and ports and through calculated use of terror to unleash a mass migration of people to destabilize neighboring countries and Europe,” he said.
ISIS still maintains strong presence in Libya, capitalizing on the chaos that has engulfed the country since 2011.
A prominent portion of Libya’s oil fields and reserves are located south of Sirte, along with major refineries. The country is home to Africa’s largest reserves, and its optimum quality of light crude is highly sought. Despite its ongoing political crisis, production in Libya last week climbed to around 885,000 barrels per day – triple its production this time a year ago – making the region ever more important to the global oil equation, and ISIS’s presence there ever more troubling.
The terrorist army has, in Iraq and Syria, used oil fields as a means to fund its barbaric reign.
While more fighters are now expected to flow into Libya as the pressure on Iraq and Syria mounts, exactly how big the ISIS ranks in Libya are at present, remains largely contested.
In March, Marine Corps. Gen. Thomas Waldhauser, head of the U.S military’s Africa Command, told Pentagon reporters that their fighter numbers had fallen below 200 from an estimated five to six thousand a year earlier. But a spokesperson for Africa Command told Fox News this week that their strength has been assessed to be around 500.
In sharp contrast, LNA’s Almesmari said ISIS numbers are far larger – around “five to seven thousand people of different nationalities.”
The terrorist group, Pelton indicated, is well positioned to survive territorial losses such as Mosul, Raqqa and Sirte as its savvy propaganda promotion ensures ongoing recruitment.
“ISIS is a transnational franchise that comes with funding, trainers and PR packages,” Pelton noted. “They seek out groups who will re-brand themselves and project the image of an international organization by standardizing logos, messaging and even design criteria for tweets and videos.”
Since the death of its longtime leader Muammar Qaddafi – who was killed in 2011 following then-U.S. Secretary of State Hillary Clinton and the Obama administration’s alleged maneuvers to back rebels in the quest for regime change – Libya as a country remains in a protracted state of conflict and a breeding ground for violent militias to emerge. It’s flushed with radical militias, weapons, human traffickers and two main – although there are many – competing factions.
There is the U.S. and U.N.-supported Government of National Accord (GNA) led by Prime Minister Fayez Serraj in Tripoli, at odds with the LNA which is helmed by the Egypt-endorsed, Benghazi-based Gen. Khalifa Haftar. One U.S official affiliated with the GNA, who requested anonymity, told Fox News that the “political and security vacuum” that existed in the country post 2011 “allowed ISIS to take root.”
“ISIS still poses a threat not just to Libya,” the U.S official added, “but to its neighbors, Europe and the United States.”
Hollie McKay has been a FoxNews.com staff reporter since 2007. She has reported extensively from the Middle East on the rise and fall of terrorist groups such as ISIS in Iraq. Follow her on twitter at @holliesmckay