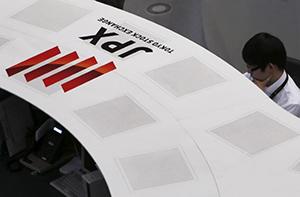 TOKYO (Reuters) – Japanese fund managers trimmed their exposure to stocks and raised their bond holdings in July for the fifth straight month, a Reuters poll showed, with Japanese debt yields declining sharply mid-month on expectations that the Bank of Japan would stick to its easy monetary policy indefinitely.

The survey of five Japan-based fund managers conducted between July 19 and 26 showed respondents on average wanted to allocate 58.7 percent of their model portfolios to bonds in July, from 56.9 percent in June.

All responses were received before the U.S. Federal Reserve concluded its two-day meeting on Wednesday, at which it maintained its benchmark lending rate and said it was continuing its slow path of monetary tightening but also noted that inflation had cooled. The perceived dovish tone sent the dollar to a 13-month low against a basket of currencies and pushed down U.S Treasury yields.

But the BOJ curbed the yield rise with a special bond buying operation on July 7, sending a message that it remained committed to its yield curve control policy.

The BOJ also pushed back its inflation target for the sixth time in July, reinforcing views that it will lag well behind other central banks in scaling back its massive stimulus program. The 10-year JGB yield last stood at 0.070 percent.

Speculation that the Fed’s attempts to normalize its monetary policy would continue at a slow pace was also seen favoring government bonds.

“The U.S. economy is well but not stellar. Higher U.S. yields could destabilize equities which are already at lofty levels,” said Yuichi Kodama, chief economist at Meiji Yasuda Insurance.

“U.S. inflationary pressures are also weak due to slow wage growth and the Fed might find it difficult to raise rates this year if it were to start trimming its balance sheet in September,” added Kodama, who also expects any remaining upward pressure on Japanese yields to ease after August.

The 10-year Treasury note yield rose to a two-month high of 2.40 percent early in July but has slipped back to 2.29 percent.

Among bonds, the respondents increased Japanese debt exposure to 38.3 percent in July from 36.7 percent in June. They trimmed North American bond holdings to 34.6 percent from 35.5 percent.

Among equities, they raised their exposure to North American stocks to 30.5 percent in July from 28.0 percent in June as Wall Street shares reached record highs. They also increased their holdings of Japanese equities to 48.8 percent from 46.3 percent.