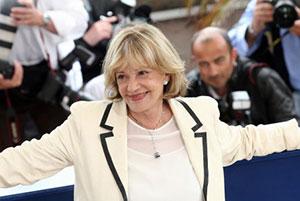 A leading screen presence for more than 60 years, and a member of the Nouvelle Vague, legendary French actress Jeanne Moreau has died. She passed away overnight at her home in Paris at age 89. The mayor’s office of the city’s 17th arrondissement confirmed the news to Deadline.

The gravelly-voiced, multi-award winner was a fixture of French cinema with roles in such classic films as Louis Malle’s 1958 Ascenseur Pour L’Echafaud (Elevator To The Gallows) and Les Amants (The Lovers), and François Truffaut’s 1962 love triangle Jules And Jim in which she sang the emblematic “Le Tourbillon.” Other collaborations were with such directors as Orson Welles, Joseph Losey, Michelangelo Antonioni, Luis Bunuel, Elia Kazan and Wim Wenders.

Moreau was born in Paris on January 23, 1928 and got her start on the stage. Her first film role was in 1949’s Last Love before the role that changed her career as a criminal lover in Malle’s 1958 noir, Elevator To The Gallows. In the 60s, along with Jules And Jim, she appeared in several international movies including Antonioni’s La Notte; Welles’ The Trial, The Immortal Story and Chimes At Midnight; Losey’s Eva, Tony Richardson’s Mademoiselle and Bunuel’s Diary Of A Chambermaid.

Her father was a French restaurateur and her mother a cabaret dancer from Oldham, England. In a 2001 interview with The Guardian, Moreau said it was her mother’s background that influenced her personality. “People in France could see I was different from the usual actresses of that time. Maybe that’s why I attracted so many Anglo-Saxon directors like Orson Welles and Tony Richardson. In French, one says ‘Ma langue maternelle est le français.’ But I say ‘Ma langue maternelle est l’anglais.’ My feminine side is English.”

In 1974, she appeared with Gérard Depardieu, Miou-Miou and Patrick Dewaere in Bertrand Blier’s sexually explicit and controversial Les Valseuses. With Kazan in 1975, Moreau made The Last Tycoon with Robert De Niro, Tony Curtis, Robert Mitchum, Jack Nicholson and Donald Pleasence. She further reteamed with Losey in the 70s and 80s for Monsieur Klein and The Trout.

In Luc Besson’s 1990 La Femme Nikita, Moreau was a trainer to Anne Parillaud’s assassin. The next year, she appeared in Wenders’ sci-fi drama Until The End Of The World. More recent work included a brief role in 1998 Fox fairy tale Ever After with Drew Barrymore; François Ozon’s 2005 Time To Leave; and Manoel de Oliveira’s Gebo And The Shadow in 2012.

Directing credits include 1979 drama The Adolescent which she co-scripted, and the same year’s Lumière which she also wrote.

In all, Moreau made over 130 films and continued to work into her 80s. Awards she accumulated include a 1958 Best Actress prize at the Venice Film Festival for Les Amants; the 1960 Cannes Best Actress trophy for Peter Brook’s Seven Days… Seven Nights (Moderato Cantabile); a 1967 BAFTA for Malle’s Viva Maria! as Best Foreign Actress; and the Best Actress César for 1991’s The Old Lady Who Walked Into The Sea.

Lifetime Achievement honors have been bestowed by the Césars; the Cannes, Berlin and Venice Film Festivals; and the BAFTAs. In 1998, the Academy of Motion Picture Arts and Sciences paid tribute to her then-50-year-old career.

She is the only woman to have served twice as the president of the Cannes Film Festival jury, in 1975 and 1995, and was a regular at the Riviera event. On a personal note, she was also a sometime regular in my early days in Paris — we belonged to the same video club in the 7th arrondissement and I would run into her renting films. It was, at the time, the only reliable place to get subtitled, rather than dubbed, versions of movies and TV shows and, as testament to just how international a lady she was, she preferred being able to see things in their original versions.

On Twitter, French President Emanuel Macron today wrote Moreau was “an engaged artist in the whirlwind of life…”

The Elysées Palace released a statement that reads in part:

“There are personalities who alone seem to sum up their art. Jeanne Moreau was one of them. With her disappears an artist who embodied cinema in its complexity, its memory, its exigency.”

The Venice Film Festival sent a “heartfelt salute”:
Among the missives from Cannes Film Festival President Pierre Lescure this morning are tweets hailing films like Jacques Becker’s Don’t Touch The Loot and Truffaut’s The Bride Wore Black, mixed with “such sadness”: