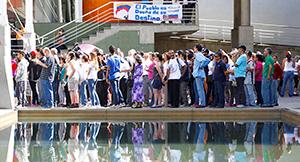 Only 9 percent of voters took part in the Venezuelan election to the Constituent Assembly, opposition lawmaker Delsa Solorzano said at a press conference.

MEXICO CITY (Sputnik) — On Sunday, Venezuela is holding election of the members of the Constituent Assembly, a new legislative body with the power to amend the constitution.
“The turnout amounts to 9 percent with 25 percent of these votes belonging to civil servants, they are not valid,” Solorzano said on Sunday.
There is no official data about the turnout. Earlier on Sunday, one of the opposition leaders, Governor of of the Venezuelan state of Miranda, Henrique Capriles Radonski wrote on his Twitter page that the turnout would not reach 15 percent.
Venezuelan authorities have already decided to extend the work of polling stations by an hour so that more people could take part in the election.
Venezuelan President Nicolas Maduro announced his decision to convene the Constituent Assembly in early May, claiming it would bring peace to the South American country hit by months of violent protests. However, the opposition fear that the Constituent Assembly would allow Maduro to bypass the opposition-controlled parliament.