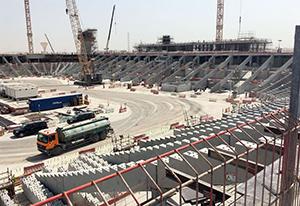 Deep pockets and a five-year lead time are keeping Qatar’s dream of hosting soccer’s 2022 World Cup from turning into a boycott-battered nightmare.

A four-nation embargo led by Saudi Arabia has cut off Qatar construction materials it was counting on to build at least eight stadiums, lay dozens of miles of rail work and erect a brand new city before the world’s most-watched sporting event. But as the diplomatic and commercial boycott approaches its third month, the gas-rich nation says it is casting further abroad and laying out more cash than planned to replace suppliers that live next door.
Malaysian steel is replacing Saudi. Oman will provide materials originally ordered from the U.A.E., they say. China is stepping into the breach with dozens of products, and even Qatar is suddenly erecting facilities to build bleachers. Some suppliers from boycotting nations are rerouting shipments through Omani ports.
“For every challenge that we face, there are solutions that keep popping up,” Secretary General of the Qatar World Cup Supreme Committee for Delivery & Legacy Hassan Al-Thawadi said in an interview in Doha. “We are working with our contractors to make sure we actually deliver long-term supply chain solutions and alternatives.” Neither he nor analysts ventured estimates for the cost overruns.
Vast Reserves
The outsize tab will be paid for courtesy of vast natural gas reserves that allow Qatar’s 2.6 million residents to enjoy the world’s highest per-capita income. It is that energy wealth — plus more than $335 billion worth of assets around the globe — that’s also allowed it to stand firm in its standoff with the Saudi-led alliance. The bloc on Sunday reiterated a list of 13 demands it wants Qatar to meet before talks to resolve the rift could start.
Even before the boycott tacked on costs, Qatar had committed $200 billion to build new stadiums, a $35 billion metro and rail system, and a new city for 200,000 people. It also set out to double the size of its airport to handle as many as 53 million passengers a year.
‘‘The World Cup is a do-or-die project for Qatar” and it will pay for it, said Adel Abdel Ghafar, visiting fellow at the Brookings Doha Center. “It’s a matter of prestige and national pride and they are fully invested in it, so I don’t see work for the project being stopped.”
Cranes swung concrete slabs into place and the whine of jackhammers pierced the air last week at the 40,000-seat Al Wakra stadium, where as many as 1,800 laborers work around the clock to try to finish it by the end of next year.
Desert Coup
Landing the World Cup was a coup for this small desert peninsula off Saudi Arabia’s eastern coast that’s barely a blip on the international sports scene. The project’s reputation has been hurt by reports that migrant laborers have been abused, as well as suspicions — since discounted by world soccer’s governing body — that Qatar won the right to host the tournament through bribery.
But the biggest blow came on June 5, when Saudi Arabia, the United Arab Emirates, Bahrain and Egypt cut off air, sea and land connections to punish Qatar for its cordial ties with Iran and for supporting groups they deem to be terrorists — a charge it denies.
Initial shortages of specific construction materials have mostly subsided but contractors’ worries about non-payment and delayed payment, which predated the boycott, “will now likely be exacerbated by it,” said Allison Wood, a Middle East and North Africa analyst with the Control Risks strategy firm in Dubai.
“The goods from new supply chains are often more expensive and a lot of contractors are already operating on quite low margins, so higher costs of materials can really cut into their bottom line,” she added. “There’s no doubt that the boycott will put an additional premium on what was already going to be a very expensive World Cup.”
The other stadiums are under construction, and are to be completed by 2020, to allow for 18 months of testing before more than a million fans pour in, Al-Thawadi said.
Contractors say they’ve had to move fast to find new markets for comparable materials, and that’s delayed things. Al-Thawadi said that won’t affect the overall schedule and that cost overruns as a result of having to create last-minute supply chains have been minimal.
“The good thing is we have a buffer,” Al-Thawadi said.