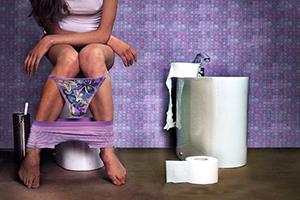 Next time you go to the loo, don’t be in a rush to flush.
“It’s definitely worth taking a look first because the colour and smell of your urine can give a lot of clues about your health,” says Dr Dawn Harper, presenter of Channel 4’s Embarrassing Bodies.
Dawn is on a mission to boost Britain’s hydration levels, after an independent study commissioned by SodaStream revealed the dire state of the nation’s drinking. The marvellously titled 50 Shades Of Yellow report found the average British woman manages to drink a mere 924ml of water a day, which is less than half of the official recommendation of two litres a day.
So we all just need to neck the mythical eight glasses of water, right? Wrong, says Dawn.
‘There’s a lot of talk about us needing a specific amount of water but I think that can be confusing and even misleading,’ she says. ‘How much water you need to drink depends on lots of factors, such as the temperature, how active you are and how much fluid you’re getting from food.
‘To assess your hydration levels, it’s far simpler and more reliable to just look at the colour of your wee – it should be straw or champagne coloured, no darker’.
So what does it mean if YOURS doesn’t meet the gold standard? Read on to find out…
Dark wee
Wee that’s a darker yellow colour than straw suggests you’re dehydrated.
“People think, ‘I don’t need to drink, I’m not thirsty,’ but by the time you actually feel thirsty you’re already clinically dehydrated,’ says Dawn. “Even being moderately dehydrated can affect cognitive function, cause headaches and leave you feeling foggy.”
Up your water intake and you should quickly see a difference. However, dark urine that doesn’t improve when you drink more should be checked out by a GP because it can be a sign of liver problems.
Brown wee
Some of the antibiotics commonly given for urine infections, such as metronidazole and nitrofurantoin, can make wee a dark brown colour.
“People often worry that means the infection is getting worse, but the colour should return to normal once the antibiotics are finished,” says Dawn. “If you have gallstones, your urine might be so dark it’s almost brown. You may also get very pale, floaty stools.”
Bright wee
If your pee looks decidedly day-glow, have a look at any vitamins you’re taking.
“Supplements high in B vitamins can give urine a vivid deep yellow colour,” says Dawn. But it’s nothing to worry about.
Clear wee
If your wee looks like water, you’re drinking too much.
“Consuming a lot of water shouldn’t be a problem, but in extreme cases you can become over-hydrated,” says Dawn. “It can affect the biochemistry in your blood and, in rare cases, lead to fits.”
It’s not an issue if you’re just sipping at a bottle, but it has been known to affect people downing huge amounts of water when training for extreme events such as marathons.
Red wee
Before you panic that you’re peeing blood, think about what you’ve been eating recently.
“Foods such as beetroot, rhubarb and blackberries can turn urine pink or red, while carrots can turn it orange,” says Dawn. “However, if your urine is pink or red for no reason, it must be checked out asap. Blood in your pee can be something as simple as a urine infection, but it can also be a sign of cancer.”
Green wee
Have you been eating a lot of asparagus? That might explain why you’re peeing green.
“Asparagus pee tends to have a characteristic smell as well,” says Dawn. Green food colouring can also be to blame. “Some medications, including antidepressants such as amitriptyline, can give urine a bluey-greeny colour too,” adds Dawn.
Cloudy wee
This can suggest an infection, says Dawn.
“Your GP or practice nurse will be able to quickly check whether you have proteins in your urine.”
If you need antibiotics, your wee sample can be sent off to pinpoint the most effective one.
Foamy urine
Have you been holding in your pee to bursting point?
“If you’re passing a very strong stream of urine, it can look quite bubbly in the bowl,” says Dawn.
If you see foamy wee all the time though, it can suggest you’ve got excess protein in your urine. This can be a sign that your kidneys aren’t filtering out protein effectively. See your GP.

P is for pain… (and pong)
If it hurts to wee, the most obvious reason is that you’ve got a urinary tract infection, but there can be other causes.
“STIs such as chlamydia and gonorrhoea often have no symptoms whatsoever, but sometimes they can cause pain on passing urine,” says Dawn.
Smelly urine can also be a sign of a urinary infection, but pay extra attention to wee that smells sweet.
“A pear drops scent can be a sign of undiagnosed type 1 diabetes,” says Dawn. “If you’re on a no-carbs diet, you can also get the same smell.”
How to get hydrated
We’re really not the greatest at getting our fluids – 64% of us know dark pee is a sign of poor hydration but only 43% will actually do something about it. Here’s how to make it easier to boost your water levels…
1) Top up a water bottle at the start of the day and keep it with you. A lot of us find it easier to drink water that’s fizzy or flavoured, so try adding slices of lemon or lime to boost taste without any sugar.
2) Drink with your meals. ‘It’s a myth that you’re ‘washing away’ nutrients and not absorbing them properly if you have water with food,’ says Dawn.
3) Carry on with tea and coffee. ‘Caffeine does have a small diuretic effect, which means you produce more urine,’ says Dawn. ‘Although a cup of coffee isn’t quite as hydrating as a cup of pure water, you will still be getting fluid from it.’
4) Does the prospect of night-time toilet trips put you off drinking enough water? It’s fine to get your fluids earlier in the day so you can then sleep through. ‘Six o’clock seems to be the cut-off point for a lot of people but experiment to see what works for you,’ says Dawn.
Dr Dawn Harper is working with SodaStream to encourage the British public to drastically increase their water intake this summer. Keep hydrated with a SodaStream and make refreshing sparkling water from ordinary tap water at home: Sodastream.co.uk/50shadesofyellow