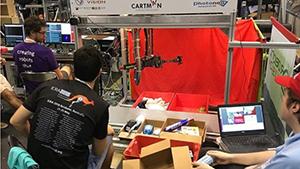 Cartman – a budget-priced robot from Australia – has triumphed in an annual contest to create a machine that can identify, pick up and stow warehouse goods.

The bot was designed from scratch to take part in 2017’s Amazon Robotics Challenge and used a radically different design to past winners.
Instead of building a robotic arm, the victors used a sliding mechanism that picked up products from above.
The four-day event was held in Japan.
The winning Australian Centre for Robotic Vision (ACRV) squad were engineers from Queensland University of Technology, the University of Adelaide and the Australian National University.
They walked away with the $80,000 (£60,980) cash prize.
“The parts for the robot were cheap by the standards of typical industrial robots and it could be built for under 30,000 Australian dollars [£18,245; $23,935] including its sensors,” Prof Jonathan Roberts, robotics lab leader at Queensland University of Technology told the BBC.
“But there were many thousands of hours of team effort that went into the design, testing and programming.”
Amazon already uses robots to move goods about its warehouses, but relies on humans to pick up and pack them.
It began hosting the competition in 2015 as a means to “promote shared and open solutions” to automating the tasks.
A total of 16 teams from 10 countries took part in the latest challenge in the city of Nagoya.
There were three stages to 2017’s time-limited contest:
• the robot contestants had to pick up specified products from a mix of items and place them in the kind of boxes that might be used for deliveries
• the robots had to take target items out of a container and place them into storage
• a combination of the first two tasks, where all the items first had to be put into storage and then a selection lifted and put into boxes
Amazon provided the teams with details of about half the products they would face in advance, but gave the roboticists just 30 minutes to photograph and practise with the others.
Points were awarded for correctly placing the items, with bonuses given for any remaining time on the clock.
But penalties were imposed for mistakes, dropping items from too great a height, and causing damage to the products and boxes.
Cartman only placed fifth after the first two parts of the trials, but managed to leapfrog its rivals in the final stage.
The winning team believes its “Cartesian co-ordinate robot” design was better suited to the task than the arm-like designs of others.
The description refers to a robot that uses a frame to move in straight lines across three axes that are at right-angles to each other – ie vertically, horizontally and forward/back – in a similar fashion to the way container port cranes work.
In this case, the mechanism was used to support a rotating gripper that used suction cups and a two-fingered claw to grasp and manipulate the products.
“It works a lot like a 3D-printer mechanism, where the robot manipulator is moved backwards and forwards and up and down,” explained Prof Jonathan Roberts.
“This made for a more accurate and simple system.”
The result was a big improvement on the same team’s sixth-place ranking in 2016, when it programmed a Baxter robot to take part.
“We learnt from our experience last year when we used an off-the-shelf robot,” commented team leader Dr Juxi Leitner.
“[This year] I think we had the lowest cost robot at the event.”