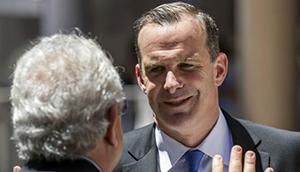 ByTM
The Turkish Foreign Ministry on Sunday slammed recent remarks by Brett McGurk, the US special presidential envoy for the Global Coalition against ISIL, for claiming there was a link between Turkey and the presence of al-Qaeda-affiliated groups in Syria’s Idlib province.

In a written statement on Sunday, Turkish Foreign Ministry spokesperson Hüseyin Müftüoğlu rejected McGurk’s comments and said the objections were brought to McGurk’s attention in a demarche.
“McGurk was reminded of both the fact that the root causes enabling terrorist organizations to find a foothold in Syria and Iraq could be eradicated only if the deeds and actions of all relevant actors do not contradict one another, and our expectation is that the Syria-based terrorist organization PYD [Democratic Union Party]/YPG [People’s Protection Units] is not supported for whatever the reason may be,” he said, according to the state-run TRT World website.
According to the Hürriyet Daily News, Foreign Ministry Deputy Undersecretary Sedat Önal said McGurk must correct his statements if he did not aim any provocation.
Önal warned the envoy that these kinds of statements could harm the basis of cooperation between the US and Turkey at a time when the US administration is seeking cooperation with Ankara for the post-Islamic State in Iraq and the Levant (ISIL) period in Syria.
“… And al-Qaeda has taken full advantage of it. And Idlib now is a huge problem. It’s an al-Qaeda safe haven right on the border of Turkey. So that’s something obviously we will be in very close discussions with the Turks on, and I think as we did in some ISIS areas in sealing the border making sure nobody can cross is something we might have to think about in Idlib province,” said McGurk during a speech at the Middle East Institute in Washington, D.C., on Thursday, underlining that it was a result of Turkey’s unchecked transfer of tens of thousands of tons of weapons and allowing foreign fighters to get into Syria.
“Because it’s a huge problem. It’s a different problem than ISIS, but it’s a big problem, and something we have to very much focus on as a counter terrorism objective,” added McGurk.