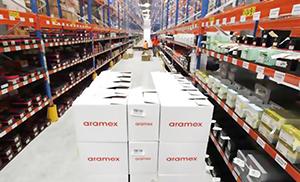 Sean Cronin
LONDON: Aramex, the Dubai-listed courier company, said second-quarter profit fell 23 percent to 97 million dirhams ($26.4 million) as it was hit by currency fluctuations and a one-off impairment in Egypt.

The company which is seen as a bellwether of regional online shopping said that that cross border e-commerce was a key driver for revenue growth.
Revenue grew by about 2 percent over the quarter to 1.48 billion dirhams but its earnings were impacted by a one off impairment related to its investment in AMC Logistics.
Aramex said that had it not been for that adjustment it would have grown its profits by 15 percent over the quarter.
“Looking toward the second half of 2017, we are excited about our future prospects for growth, and will be actively identifying acquisitions and strategic partnerships to expand our global reach,” said Aramex CEO Hussein Hachem.
The logistics company said that performance in the Gulf had been “relatively slow” during the quarter because of holidays and “ongoing economic uncertainty”.
While Aramex stands to emerge as a major winner from the rapid growth of online shopping across the region, analysts say it is also exposed to weaker consumer confidence in the wake of a two-year decline in the price of oil.
A flurry of major e-commerce acquisitions this year has shaken up what had until recently been a subdued sector as the uptake of Internet shopping by regional consumer lagged many other regions.
That is now changing as more people turn to the web to buy everything from groceries to electronics in a trend that threatens the region’s mega malls.
The Gulf e-commerce sector is expected to grow to about $20 billion by the end of decade compared to about $5.3 billion in 2015.
Such growth projection has triggered a stampede of investments in the sector.
This year Amazon bought online marketplace Souq.com while Emaar executive chairman Mohamed Alabbar is setting up his own e-commerce venture called Noon.com.
The billionaire businessman who helped to transform the Dubai skyline with projects such at the Burj Khalifa last year became an investor in Aramex as the company looks to surf the regional wave of e-commerce by delivering the goods bought by Middle Eastern shoppers.
Alabbar led two regional investor groups in buying a 16.5 percent stake in the company.
Sanyalaksna Manibhandu, head of research at NBAD Securities told Arab News that bricks and mortar companies including logistics players such as Aramex, risked overpaying for e-commerce assets and that it was important to “proceed carefully.”