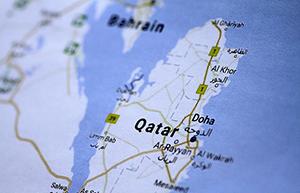 Within this context, Russia is an excellent candidate for mediator in the process of normalizing the situation in the region, but success of this mission depends on many circumstances, first of all reaction to Moscow’s actions from the West, said professor of political sciences Tarek Heggy.
Imposed confrontation
“In conditions of tensions in the Persian Gulf zone, a problem that invites special concern should not be omitted – a conflict between Sunnis and Shiites, as the whole crisis around Qatar should be considered exactly from this angle,” the professor said.
“Saudi Arabia is a stronghold of fundamentalist movements in Sunni Islam. Iran, which supports Doha, is on the contrary a stronghold of Shiite fundamentalism,” Tarek Heggy said. He said “tensions are very high, and there is a possibility of an armed conflict, even a war”.
“In the 1960s and 1970s we did not even hear about such contradictions, and we can say positively that the problem has been created in the recent years, and the whole region has been forced into this conflict,” he noted.
Saudi Arabia is the main purchaser of weapons in the world, and it will keep buying weapons. The United Arab Emirates (UAE) is also among the major buyers of armaments on the world market, he went on, saying the situation in the region is very dangerous at the moment.
“Speaking about the realities existing at the moment, Egypt that possesses the most powerful army in the region will back Saudi Arabia and the UAE, in case of an armed conflict, in other words it will be involved in military confrontation between these two Arab states and Iran,” the expert explained.
Noting that most Egyptians don’t support such developments, he said that “media in Iran and in Saudi Arabia is currently rocking the boat so that one can get an impression that if they are not waging a war against each other yet, they are on the very edge of it,” he said.
Russia has no imperial ambitions
The Egyptian political analyst backed the possibility of the strengthening of Russia’s role in the region, including in the area of the Persian Gulf. “The Arabs know and now they understand especially clearly that Russia’s involvement in affairs of the region has no imperial connotation, which is seen in Europe or the United States,” the expert said.
“Of course, Russia has its interests, but it is not exporting its principles or schemes that it intends to apply in the region,” He said Russia “proves that it is not seeking to establish a new pattern of mutual relations fitting within its criteria and at its own discretion”.
To prove this, he mentioned the crisis in Syria. “Not all, but very many people in the Arab countries welcome Russia’s role in Syria, understanding that Syria would have already ceased to exist as a state without Russia’s support,” he said.
“This is exactly what makes Russia an excellent candidate for mediator in the settlement of the current conflict around Qatar,” Tarek Heggy said. “It does not necessarily mean that Russia will manage this, as Saudi Arabia is at the moment fully in the hands of the US administration led by Donald Trump,” he explained. “The UAE leadership is closer to understanding that Russia’s role in the region is necessary, but it gives rise to strong doubts that Washington will accept Russia’s active participation in affairs of that region,” he noted.