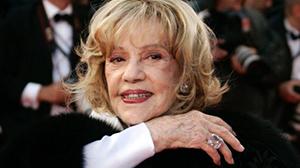 Acclaimed French actress Jeanne Moreau, whose films include such masterpieces as Jules et Jim, has died. She was 89.

She was honoured with a 1965 Time magazine cover story, rare for a foreign actress, and was compared to such screen greats as Garbo and Monroe. Since her rise to prominence in the mid-’50s, she epitomised the tenets of the French new wave, boasting a womanly sexuality and a fierce independent spirit.

Orson Welles, who worked with Moreau on several films, once called her “the greatest actress in the world.”

Major directors scrambled to work with her and often became her lovers offscreen. She starred in films by Louis Malle, Francois Truffaut, Jacques Demy, Michelangelo Antonioni, Welles, Luis Bunuel and Joseph Losey. In the mid ’70s she turned briefly to directing and even paid homage to an earlier screen legend with a documentary about Lillian Gish.

It was her second film for Malle, the racy Les Amants, in 1958 that made her an international star and icon. She followed it with Les Liaisons dangereuses, for Roger Vadim; Les Dialogue des Carmelites; 1960’s Marguerite Duras-scripted Moderato Cantabile, which won her a best actress award at Cannes; Antonioni’s La notte, in which she played an alienated woman of the upper class; and, most memorably, Francois Truffaut’s Jules et Jim (1962), which she and the director financed.

She starred with Anthony Perkins in Welles’ Kafka adaptation The Trial in 1962, but her first Hollywood role came in the routine The Victors, followed by John Frankenheimer’s excellent WWII thriller The Train and Anthony Asquith’s unchallenging comedy The Yellow Rolls Royce.

She famously turned down Mike Nichols’ invitation to play Mrs Robinson in The Graduate, and instead reunited with Truffaut for 1968’s The Bride Wore Black, a homage to Alfred Hitchcock.

Time magazine once observed: “Moreau forcefully demonstrates the verve, style and flamboyant femaleness that makes her the envy of European sex symbols much greener in years…Too bad that a first-rate actress so often has to squeeze her victories out of second-rate scripts.”

Moreau won a Cesar – one of France’s highest acting honours – for her performance as an irrepressible con artist in The Old Lady Who Wades in the Sea (1992). She also won the best actress at Cannes for Seven Days… Seven Nights in 1960.

Moreau was head of the jury at the 33rd Berlin Film Festival in 1983, won an Honorary Golden Berlin Bear at the festival in 2000 and picked up an honorary Palme d’Or at Cannes in 2003 and an honorary Cesar in 2008.

The Academy of Motion Picture Arts & Sciences saluted Moreau in a tribute held in 1998.

She was married twice, first to actor, director and screenwriter Jean-Louis Richard (1949-51) and then to American film director William Friedkin (1977-79). She is survived by a son, actor Jerome Richard.

Paying tribute to her, French President Emmanuel Macron said Moreau had “embodied cinema” and she was a free spirit who “always rebelled against the established order”.

“The list of directors with whom she worked tells the story of 20th century cinema, from Louis Malle, Roger Vadim, and Francois Truffaut to Amos Gitai and Wim Wenders, via Orson Welles, Joseph Losey, Michelangelo Antonioni, Jean-Luc Godard and others,” Macron said.