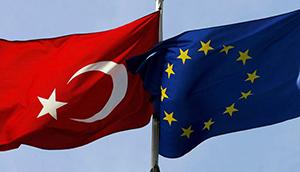 The German government has asked the European Commission to suspend preparatory work on negotiations with Turkey for modernizing the EU-Turkey customs union because it would send the “wrong signal,” Reuters reported on Monday.

According to the story, a German government paper obtained by Reuters mentioned a number of other measures it would like to see implemented at the European level to increase financial pressure on Turkey to respect the rule of law.
According to the paper, given developments in Turkey, pre-accession aid (IPA) should be targeted “even more towards supporting democracy and the rule of law.”
The paper also said the European Commission should look into suspending all pre-accession aid to Turkey if the need arises.
It added that Germany expected the commission to “shift funding away from Turkey in a way that is meaningful compared to the overall funding Turkey receives under the IPA schemes.”
Ankara’s relations with Berlin have been strained since Turkey’s crackdown on opposition groups, including journalists and human rights defenders, after a botched coup attempt on July 15, 2016.