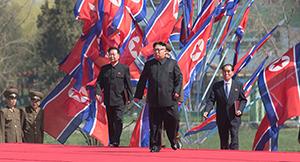 South Korean military strategists are reportedly preparing a contingency “surgical strike” against North Korean command, nuclear and missile facilities, which would be initiated by President Moon Jae-in’s Special Forces in the event of an emergency, according to a report in South Korean newspaper Munwha Ilbo.

Seoul’s Joint Chiefs of Staff and the Ministry of National Defense have taken the lead on designing the operation, rather than the National Security Office or Weapons of Mass Destruction department, according to the report that was published on Monday — three days after North Korea’s second suspected intercontinental ballistic missile test.
The NSO and WMD teams have been tasked with establishing separate “precision strike” plans for responding to a nuclear or conventional ballistic missile scenario that has “reached the critical threshold of the Red Line,” the news agency said.
According to Munwha Ilbo, the plan mobilizes F-15 jets to target key operational command centers in the North, most notably “the windows of the office of the Chairman of the Labor Party, Kim Jong-un, at the Pyongyang Labor Party headquarters.” Unnamed military officials told the news outlet that “surgical” counter-strike plans were being drafted as early as March 31.
Moon has reportedly requested the creation of a new 1,000 to 2,000-person Special Forces brigade “to eliminate war leaderships” and “paralyze command facilities in case of emergency.”
US Special Forces reportedly could have taken out Kim on July 4 but didn’t take the shot.
South Korea’s Ministry of National Defense announced on Monday that “North Korea is likely to test its nuclear warhead and missile through” another “test with more explosive power.” Defense officials believe the next missile text could happen at any time.