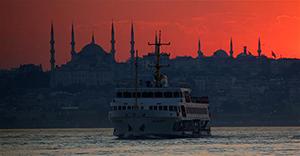 Istanbul hotels’ loss in revenue exceeded 1 billion euros in the first half of 2017 compared to the same period of 2015, despite a recent ease in security concerns, a leading sector association stated on July 31.

Istanbul again saw the largest revenue loss among all European destinations in 2017, the Hotels Association of Turkey (TÜROB) said in a statement, citing STR Global data.

“Despite an ease in security concerns and a rise in hotel occupancy rates, there has not been any rebound in hotel revenues. The main problem here is the stress resulting from the budget-destination image.
Security concerns and other risks have unfortunately become a trump card in pricing Istanbul’s hotels,” TÜROB President Timur Bayındır said.

“Our calculations show that Istanbul hotels’ revenue loss hit 1 billion euros in the first half of 2017, compared to the same periods of 2015 and 2016. When the figures of the second half, which includes the ‘hot season,’ are examined, the loss will be worse,” he added.

The Average Daily Rates (ADR) of the city, meanwhile, declined to 72.3 euros in the first half of the year from 96.2 euros in the same period of 2016, STR Global data showed. The city’s revenue per available room (RevPAR) also regressed to 38.5 euros from 47.3 euros in the mentioned period.

Its ADR saw a 17.5 percent year-on-year decrease in June and its RevPAR declined 10.5 percent, making Istanbul the city that saw the biggest revenue loss across Europe.

In the Mediterranean resort of Antalya, hotel occupancy rates increased to 54.1 percent in the first half of the year from 50.7 percent in the same period of 2016.

Despite a significant rise in hotel revenues in the southern province of Antalya in June, its ADR regressed from 64.8 euros to 59.9 euros in the first half of the year compared to the same period of 2016. Its RevPAR also declined from 32.8 euros to 32.4 euros in the mentioned period.

Commenting on the Culture and Tourism Ministry’s latest tourism figures for Istanbul, CHP deputy Didem Engin noted that the city had been trailing other cities in Europe in terms of both foreign visitor numbers and tourism revenue over the past few years.

She also added that Istanbul saw the biggest revenue loss among European destinations in June 2017 in terms of the average daily rate and revenue per hotel room, according to data from the Turkish Hoteliers Association.

Engin stated that the decline in tourism was negatively affecting shopkeepers on the city’s historic peninsula, many of which have either been abandoned or put up for sale as they cannot afford the rent.

“Government should take urgent measures to help revive tourism in both Turkey and in Istanbul,” she said.