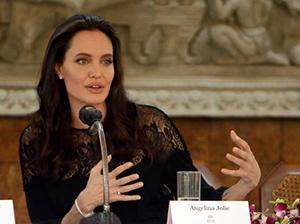 Rachael Alexander
Angelina Jolie says accounts of her casting process for children to appear in her film ‘First They Killed My Father’ are false and upsetting.

An excerpt from a ‘Vanity Fair’ profile of the director sparked backlash online earlier this week from people who criticised the methods as being cruel and exploitative.
Adapted from Loung Ung’s memoir, the biographical drama centres on her childhood under the brutal Khmer Rouge regime in Cambodia. Jolie co-wrote and directed the film.
The article described a scene in which casting directors – in their attempt to find a child actress to play the lead role – presented money to impoverished children only to take it away from them as an acting exercise. Jolie and producer Rithy Panh issued joint statements responding to the outrage and rebuffing claims that the production was exploitative through a representative from Netflix, which is producing and distributing the film.
“I am upset that a pretend exercise in an improvisation, from an actual scene in the film, has been written about as if it was a real scenario.
“The suggestion that real money was taken from a child during an audition is false and upsetting,” Jolie said. “I would be outraged myself if this had happened.”
Jolie said parents, guardians and doctors were on set daily to care for the children and “make sure that no one was in any way hurt by participating in the recreation of such a painful part of their history”.
Panh, who himself is a survivor of the Khmer Rouge, added that casting “was done in the most sensitive way possible”. “The children were not tricked or entrapped, as some have suggested,” Mr Panh said. “They understood very well that this was acting, and make believe.”
The ‘Vanity Fair’ article went into more detail about the production than the one paragraph that circulated on Twitter, which sparked the initial outrage.
A representative from ‘Vanity Fair’ issued a statement on Sunday saying that author Evgenia Peretz “clearly describes what happened during the casting process as a ‘game'” and “that the filmmakers went to extraordinary lengths to be sensitive in addressing the psychological stresses on the cast and crew that were inevitable in making a movie about the genocide carried out in Cambodia.”
Jolie’s film will debut on Netflix after showing at the Toronto International Film Festival this September.