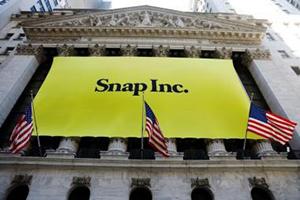 NEW YORK (Reuters) – The S&P 500 .SPX will start excluding companies that issue multiple classes of shares, managers of the index said on Monday, a move that effectively bars Snap Inc (SNAP.N) after its decision to offer stock with no voting rights.

The decision takes effect starting Tuesday, according to a statement by the manager of the widely used benchmark, S&P Dow Jones Indices LLC.

Snap did not immediately respond to a request for comment.

Existing components of the S&P index with several share classes – such as Google parent Alphabet Inc (GOOGL.O) and Berkshire Hathaway Inc (BRKa.N) – will not be affected.

“Companies with multiple share class structures tend to have corporate governance structures that treat different shareholder classes unequally with respect to voting rights and other governance issues,” the index provider said in a statement.

The S&P changes, which extend to the S&P MidCap 400 .IDX and S&P SmallCap 600 .SPCY indexes, reflect a toughening stance by index firms and the investors they represent who increasingly emphasize the importance of corporate governance rights.

That often runs up against the interest of leaders of high-growth, often technology companies that resist coming to public markets and offering full voting rights out of fear they will lose control of their companies.

Snap’s $3.4 billion March IPO was the third-largest ever for a U.S. tech company but some investors were taken aback by the company’s unusual decision to offer new investors a class of common stock with no voting rights.

Snap shares had their busiest trading day in two and a half months in a volatile session on Monday, as early investors could sell their shares for the first time since its market debut. The stock pared losses to close down 1 percent at $13.67, after falling as much as 5.1 percent and hitting a record low.

Inclusion in a stock index has been an important milestone for young companies, bringing their shares into many passive funds and others that closely follow indexes like the S&P 500, a guide for trillions of dollars of capital worldwide.

The decision likely means that funds like $243 billion SPDR S&P 500 ETF (SPY.P) will not buy Snap any time soon.