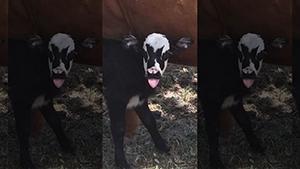 FoxNews.com
If this calf has her way, she’ll be rock and rolling all night and partying every day.

A calf born in Kerville, Texas has been given the name Genie, as she has a striking resemblance to Kiss frontman Gene Simmons.
The calf was born on July 28 and like Simmons, continues to stick her tongue out when posing for photos.
Simmons, known for his role on “Gene Simmons Family Jewels,” as well as being the lead singer of the rock band Kiss, is known for sticking his tongue out. The rock legend even had a magazine, entitled “Gene Simmons Tongue Magazine.”
Hill Country Visitor, a tourist company that promotes Texas Hill, tried to get Simmons’ attention with a Facebook post, asking him where he was on Nov., 26, 2016.
Genie was born on Heather Leonard Taccetta’s ranch. Ironically enough, Leonard Taccetta works at a steakhouse in Texas, named Cowboy Steak House.
This is real, folks!!! Calf called Genie is born on Texas ranch and looks EXACTLY like Kiss rocker Gene Simmons https://t.co/m6CcUlA7cy
— Gene Simmons (@genesimmons) July 31, 2017
“Now Obviously, we can’t serve this fine specimen, we may just keep Genie as we call her, as a Mascot for the Steakhouse,” explained Hill Country Visitor, in the Facebook post.