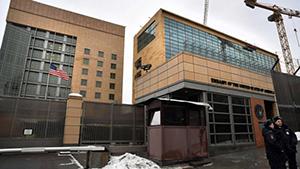 By Tara McKelvey BBC News, Washington DC
Hundreds of people work for the US in Moscow and other Russian cities. What are they all doing there?

Over the weekend Russia President Vladimir Putin said that the US had to reduce its diplomatic staff in the country by more than 750 people.
It was a startling development in US-Russia relations, exposing tension between the two countries that arises from new sanctions imposed on Russia, and suspicions about meddling in the US election.
For many it also raised a question: why are so many people working at the US embassy in Moscow and in other places around Russia? By some estimates, there are 1,200 US state employees in the country.
The number seems high – at first glance. Yet it makes sense for those who are working at the White House and trying to manage a challenging, tumultuous relationship with Russia.
Americans and Russians have important areas of co-operation: they’re working together to combat militant groups, assure the security of nuclear weapons in both countries, and reduce violence in Syria.
Besides that, the US exports billions of dollars worth of products to Russia every year.
But they also fight about things: aside from the controversy over election meddling, they’re trying to work out issues such Russia’s territorial ambition and its expansion in the region.
US officials say that monitoring Russia’s activities and keeping abreast with the different aspects of the relationship requires a lot of support in Moscow.
To that end, Americans in Russia are involved in a variety of undertakings – in different locations. Most work in Moscow, but some are employed in offices in Vladivostok, St Petersburg and Yekaterinburg.
In Moscow and the other cities, Americans process visa applications for Russians who want to travel to the US. In addition, they write cables to officials in Washington about human rights, labour and other matters.
Some of them work on agricultural, scientific and public-health initiatives that, for example, help to protect rare wildlife and combat infectious diseases.
Some work in Russia for other government agencies, as the CIA and US intelligence agencies are euphemistically known.
The number of people in Russia who are employed by the US intelligence agencies is substantial, although specifics are unavailable. Georgetown University’s Angela Stent, who used to work as a national intelligence officer, laughed at the question.
“Nobody knows that,” she said.
Still most of the people who work at the embassy and in other US offices in Russia are not spies or spymasters; most, in fact, are not even US citizens. They’re Russian.
Of the 1,279 people who worked at the embassy in 2013, according to a 2013 inspector general report, 934 were locally hired.
The Russian staff help to organise events, process visas, fix computers and otherwise keep the place running. For them, Putin’s announcement was troubling.
“These people will lose their jobs,” said Yuval Weber, a fellow at the Wilson Center in Washington.
It also means that Russians will have a harder time getting visas for their trips to the US: at this point, he said, it takes two to five weeks for them to get a visa. With a reduced staff, it will take longer.