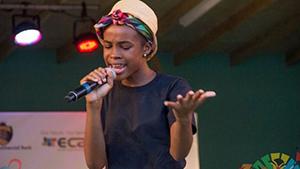 By Gemma Handy St John’s, Antigua
Solemn-faced, schoolgirl Rika Johnson reveals the lyrics to her latest song, an ode to the double-edged sword of modern technology.

Here, at her simple home decorated with conch shells and the national flag in the heart of the Antiguan countryside, gadgetry and robotics may seem unlikely subject matter but Rika hopes the theme will strike a chord with her calypso-loving compatriots.
It is not, like many 12-year-olds, pop stardom Rika dreams of however.
She hopes to one day become prime minister.
Calypso music was born hundreds of years ago in the sugar plantation fields of the Caribbean among slaves forbidden from speaking to each other as a means of communication and to mock their masters.
Characterised by satire, pun and innuendo, it evolved into a mode of stinging censure against the powers that be, using metaphor to bypass censors and speak out against corruption.
Today, calypso remains an integral part of Antiguan culture and a highlight of the summer carnival which this month will mark its 60th anniversary.
Media captionWould-be kings and queens compete in the annual calypso competition
The children’s competitions are every bit as fiercely contested as their grown-up counterparts, testimony to the genre’s enduring popularity.
Under her alter ego Little Miss, Rika hopes to reclaim the crown she earned with last year’s lamentation of slavery-era inequality.
Junior contestants are judged on use of language, clarity and stage performance, among others, and are discouraged from overly political lyrics.
“The older calypsonians say people might think we’ve been influenced by our parents who support a particular party,” Rika explains.
Like much of the Caribbean, divisions along party lines can run deep.
“I want to be prime minister one day so I can clean up the pollution which makes people sick and find homes for all the homeless,” Rika continues, adding: “To me, calypso is beautiful. It’s all about rhyming; with a sweet melody and imagination, you can create anything you want.”
The artistry reaps benefits in youngsters’ schoolwork too, says Rika’s grandmother, Goldene Lovell.
“The rhyming and verses take skill,” she tells the BBC. “And having to learn all the words helps the little ones build their ability and they listen better in school.”
African storytelling traditions are deeply ingrained in Caribbean culture. Among older folk, calypso evokes a certain nostalgia of days when life was simpler and is popularised by topical issues and catchy, singalong choruses.
“It’s a part of our culture that people love,” Ms Lovell adds. “Nobody should get offended by the lyrics or take them too seriously.”
Speech may be freer these days in Antigua & Barbuda but calypso continues to stir up controversy.
One Carnival 2017 entry candidly accusing Prime Minister Gaston Browne of misappropriating public funds prompted threats from Mr Browne of a defamation lawsuit against both the artist and the radio stations that play it.
Calypso’s creativity lies in its circumlocution, says one veteran Keithroy Morson, aka De Bear.
“I think the writer was maybe too direct with that song,” he muses. “But calypso is an art form indigenous to the Caribbean and it’s important to promote its continuity among our people; it’s our voice.”
Like some of his peers, Mr Morson fears calypso may eventually be replaced by its trendy little sister, soca, the rhythm on the road during Carnival’s vibrant street parties and parades.
Fellow seasoned singer Trevor ‘King Zacari’ King remembers the backyard calypso competitions of his youth when censors’ red pens were all the more prevalent.
“People tried to use their political influence to stifle me, but I have seen rats in water swimming and a rat only drowns when it stops paddling,” he says with a grin.
Mr King believes calypso still has a vital role to play. ”
Sensible politicians should listen closely to the lyrics because calypsonians live among the people; our ears are close to the ground while politicians’ heads are above the clouds.”
He explains: “Calypso plays an integral part in the movement and education of our people. It is very important to keep it so we can enlighten our nation and guide our children.”
Dion Simmons, who helps organise the annual contests, says this year’s lyrical controversy heightened interest in calypso with the song in question, and subsequent spin-offs by other singers, going viral.
“People were breaking down the doors to get into the quarter finals,” he says.
And while calypso might attract an older crowd, Mr Simmons does not see its popularity waning any time soon.
“The songs always have some relevance to events taking place regionally or internationally,” he adds. “People now in their forties who were first brought to calypso shows as babies with their parents are still coming along. And now they’re bringing their own children with them.”

Is the WHO Too Soft on Russia?