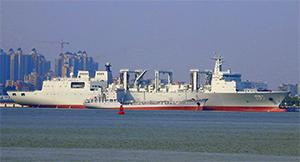 The fast-growing Chinese Navy commissioned its largest resupply vessel in history into service this week.

Observers noted the vessel in Zhanjiang on Monday wearing the call number 965 — evidence that it has entered service, the South China Morning Post reports. It is twice as large as previous supply vessel variants.
Larger ships like the Type 901 comprise a “core” factor in carrier strike groups, Rear Admiral Yin Zhuo told SCMP. Type 901 will carry oil, weapons and basic living necessities to support other ships in the People’s Liberation Army Navy. IHS Jane’s notes that hoses on the ship’s sides could be used to refuel aircraft carriers.
China’s Liaoning aircraft carrier finally came online last year and the Type 001, a Chinese-made aircraft carrier, was completed in April of this year. Plans are being drafted for a domestically-produced next-generation carrier as well.
Other analysts are calling for China to increase its portfolio of foreign ports, arguing that the support ships can only go so far in assisting long-range naval operations. “No matter how big the supply vessels are, they are still small compared to harbour cities,” defense expert Ni Lexiong told the Hong Kong news outlet, adding, “the vessels can only provide support for a limited amount of time.”
In any event, the speed with which the Chinese navy has grown in recent months and years has been jaw-dropping, according to naval historians. Singapore-based fellow Richard Bitzinger of the S. Rajaratnam School of International Studies said that while it is not possible to know precisely how much Beijing spends on its navy, “simply extrapolating from the quantity and the quality of things that are coming out of their shipyards, it’s pretty amazing.”
The UK-based Royal United Services Institute’s Peter Roberts published a report in February in which their experts said “it is hard to recall growth at a similar pace in any navy across history” and that “Beijing is slowly pulling ahead.”
On Tuesday, China formally opened its first foreign military base in Djibouti to contribute to anti-piracy operations off the Somali coast and help ensure the safe passage of commercial vessels through the strategic waterway.
By comparison, the US Navy operates overseas bases in Spain, South Korea, Kuwait, Japan, Italy, Greece, Djibouti, Cuba, Bahrain, the Bahamas and the island of Diego Garcia in the British Indian Ocean Territory.