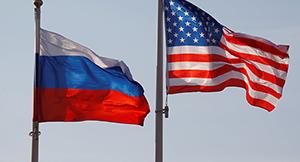 If President Donald Trump signs the anti-Russian sanctions bill sitting on his desk it likely indicates that the US foreign policy and national security establishment prevailed in their bid to renew the Cold War, former adviser to Senate Republican leaders Jim Jatras told Sputnik.

WASHINGTON (Sputnik) — On Tuesday, White House Press Secretary Sarah Sanders said during a press briefing that Trump would sign the legislation that imposes sanctions on Iran, North Korea and Russia after a legal review, despite the fact provisions limit the president’s ability to lift measures against Moscow.
Vice President Mike Pence earlier in the day, however, said the new US legislation, which was overwhelmingly passed by both houses of Congress, still allows Trump and the State Department to manage foreign policy.
“In the end, Moscow will probably focus less on sanctions and counter-sanctions than simply to accept that the US Deep State has boxed Trump in — there’s nothing he or anyone else can do about it, and that Cold War 2 will almost certainly be a fact of life — for many years,” Jatras said.
These measures ensure that renewed hostility to Russia will be structured into Trump’s policy-making apparatus, Jatras warned.
The broad spectrum of US politicians who approved the sanctions were determined to punish Russia with them regardless of the Kremlin’s policies or its desire to cooperate with the United States, Jatras predicted.
“Even if Russia did everything the US demands on, say, Ukraine and Syria, the sanctions would stay in place,” he said. “When all is said and done, the Russophobic impulse controlling US policy is not about what the Russians have done but who they are.”
Russia would be forced to take a defensive series of measures to protect itself and its people from these clear expressions of US hostility in order to survive, Jatras observed.
“As we move forward into an increasingly dangerous world I hope that Moscow focuses less on striking against the US than self-protection: breaking off reliance on the US dollar, refocusing their energy and other vital sectors toward Asia, Eurasian economic integration,” he said.
Moscow had held off reacting in the hopes that the door to better US-Russia ties would be open under Trump, Jatras recalled.
However, future Russian counter-sanctions would likely be asymmetrical in a manner to inflict real discomfort on the US, Jatras suggested.
“For example, reportedly the final version includes language adopted by the Senate that exempts NASA activities with Russia, as well as space launches conducted for NASA or the commercial sector,” he said.
The United States still does not have its own reliable launch systems in place to put military satellites into orbit without using Russian-made RB-180 rocket engines, Jatras remarked.
“As Deputy Prime Minister Dmitri Rogozin said some time back, maybe the Americans will get to the International Space Station by trampoline. Or maybe it would simply be a boost for private launch companies like SpaceX and Orbital ATK,” he said.
However, the Russians may still be loath to target such activities as Moscow values high-visibility cooperation, such as on space, Jatras acknowledged.