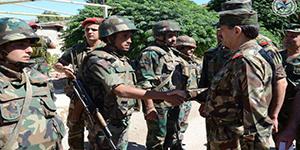 Damascus, SANA – Deputy Commander-in-Chief of the Army and Armed Forces, Defense Minister Gen. Fahd Jassem al-Freij affirmed that the Syrian Arab Army has succeeded in containing the terrorist war against the Syrian people, pointing out to the army’s regaining control of the majority of areas from terrorist organizations, that are now being hemmed in in limited areas and in a state of infighting and confusion.

In a phone interview with the Syrian TV channel on Tuesday on the occasion of the 72nd anniversary of the foundation of the Syrian Arab army, al-Freij said that the most prominent indications of the failure of the terrorist war on Syria lies mainly in the collapse of the terrorist project, with the initiative now being in the hands of the army and life returning to normal in many areas.
The Defense Minister noted that the army, in cooperation with friends and allies, has achieved many victories and strategic successes over the past years, including the liberation of Aleppo and large areas of its countryside, in addition to expanding its control on the direction of Palmyra and continuing operations successfully deep into al-Badia.
Gen. al-Freij congratulated the personnel of the Syrian Armed Forces on the Army’s Day, saluting the Syrian people who stand by the army and the supporting and allied forces as well.
“Our war against terrorism will continue, and the armed forces are called for today to give more and boost their determination to eradicate terrorism from every inch of our beloved land and to restore security and stability to the homeland,” he said.
The Minister asked God to have mercy upon the souls of Syria’s martyrs who died while defending the country, wishing speedy recovery for the wounded and extending greetings to the families of the martyrs and the injured.
Shaza/H. Said