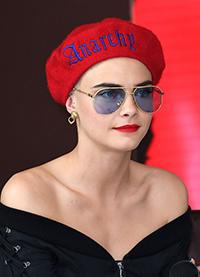 Melissa Singer
Wearing a beret doesn’t make you ooze French chic or wake up with perfectly textured hair any more than the goop I bought from Priceline last week.

And yet, fashion magazines are devoting columns of space to the return of the chapeau and its close cousin, while at Splendour in the Grass last month, street style photographer Liz Sunshine captured every colourful angle of festival goers’ headwear, which for once didn’t arouse a cultural appropriation scandal.

One of the most striking visuals was of a woman in a Che Guevera-inspired red beret that was as much military chic as it was dystopian sci-fi movie.

When in France … Cara Delevingne wears her heart on her forehead at the Cannes Film Festival. Photo: Doug Peters

“Looking back at the images, I think they are really quite transformative, like a great hair cut,” Sunshine told Fairfax Media. “The hats elevated the usual festival looks into something that was more aligned with a catwalk or the ideas of top-to-toe style,” she said.

If Splendour was the crescendo of street style’s newfound obsession with the beret, the first bars of the overture lay in the current fixation with all things 90s’ grunge.

Scroll through Bella Hadid’s Instagram and she can be seen sporting a back-to-front leather beret with a hoodie or, in another ’90s nod, with a midriff-bearing pink fluffy top that’s straight from the wardrobe department of Clueless.

On the runway, Dior’s female creative director Maria Grazia Chiuri showed leather berets that had a distinct feminist revolutionary vibe. Well, as much as hats costing hundreds of pounds by famed milliner Stephen Jones can anyway.

If Chiuri’s “We should all be feminists” T-shirts from the previous season were a more blatant call to arms, the beret has become a logo-less symbol of modern feminism for these uncertain times. Think of them as Missoni’s pussy hats without the ears.

The beret, which started as a peasant’s garment – incidentally, so did denim jeans – has been synonymous with political activism for decades. The Black Panthers wore them, as did members of the French resistance in World War II.

They have also been symbols of artists, bohemians and the anti-establishment, their relatively simple structure much cheaper to make than a hat on a block.

It wasn’t until the early 1900s that the beret became a fashion symbol, with actresses from Edith Piaf to Lauren Bacall wearing them on screen and on the street.

The humble beret has also courted its share of controversy, particularly the one worn by a young White House intern named Monica Lewinksy to a 1996 lawn party where she infamously hugged US President Bill Clinton (in 2014 she told Vanity Fair it was time to burn the beret).

Just last month, a gold sequinned beret was part of the now-infamous British Vogue cover starring Alexa Chung that ex-fashion director Lucinda Chambers labelled “crap” after she lost her job at the magazine.

Controversy aside, the beret is back and regaining its mantle as a symbol of female independence and fashion’s ‘wokeness’.

Beyonce’s backing dancers at the 2016 Super Bowl wore them, as did models in Chanel’s history-making show in Cuba last year.

Still, with popularity comes a designer price tag. Gucci’s current model sells for nearly $300. I wonder what the French peasants would make of that. “Quelle horreur”, they may say, rolling in their graves.