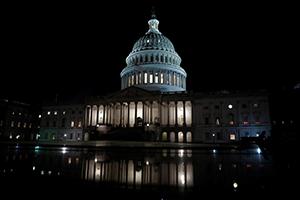 David Morgan
WASHINGTON (Reuters) – U.S. President Donald Trump sent a Twitter message bragging about corporate America’s high profits under his presidency on Tuesday, prompting critics to say he was undercutting Republican arguments in favor of a tax cut for corporations.

As Republicans in Washington try to refocus on taxes after the collapse of their failed drive to repeal Obamacare, Trump sent a morning tweet that said: “Corporations have NEVER made as much money as they are making now.”
Corporate lobbyists and Republicans consistently argue that a cut in the corporate income tax is needed to help corporations be more competitive. But highlighting corporate profits could diminish that argument.
“This is a weird way to launch their proposal to cut corporate taxes,” Democratic Senator Brian Schatz said in a tweet of his own responding to Trump.
The largest U.S. public companies have seen profits accelerate in 2017, with quarterly earnings rising at a double-digit pace compared with a year ago, according to Thomson Reuters data. Full-year earnings are expected to be up 11.5 percent, which would be the strongest growth since 2011.
More than six months into his presidency, Trump still sends out tweets that catch aides and allies off guard and sometimes clash with Republicans’ messaging on their policy agenda.
The Trump tweet “takes the edge of urgency off the plea to reduce the burden on corporations,” said William Galston, a senior fellow at the Brookings Institution think tank.
Trump later took credit for surging U.S. stock prices that pushed the Dow Jones Industrial Average to a new record high on Tuesday.
The United States Capitol is seen prior to an all night round of health care votes on Capitol Hill in Washington, U.S., July 27, 2017.Aaron P. Bernstein –
Stronger Gains Under Obama
But the broader market saw a bigger rally under former President Barack Obama. The benchmark S&P 500 Index has gained 9.4 percent since Trump took office on Jan. 20, lagging a 16.2 percent S&P gain during Obama’s first months in office.
Senate Republican leader Mitch McConnell said on Tuesday that Congress would take up tax reform after the U.S. Labor Day holiday on Sept. 4, beginning in the House of Representatives. A White House timeline envisions a House vote on tax legislation in October and Senate vote in November.
But there is little consensus on the issue. The White House insists on cutting the corporate rate to 15 percent, while House Republicans favor 20 percent. A top Senate Republican this week said lawmakers would be lucky to get it down to 25 percent.
On Tuesday, Senate Democrats offered to work with Republicans on a bipartisan tax package, but only if it does not cut taxes for the wealthy, add to the federal deficit or allow Republicans to enact legislation on their own.
But McConnell rejected the offer from 45 lawmakers led by Senate Democratic leader Chuck Schumer.
“Most of the principles that would get the country growing again, they’re not interested in addressing,” the Kentucky Republican told reporters.
McConnell said he hoped Republican legislation might win support from three Senate Democrats who face reelection next year in Republican states and did not join the offer from other Democrats.
Reporting by David Morgan; Additional reporting by Richard Cowan and Amanda Becker in Washington and Dan Burns in New York; Editing by Cynthia Osterman and Kevin Drawbaugh