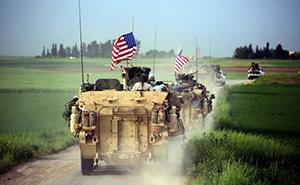 By TM
The US has sent 100 more truckloads of weapons to the Syrian Kurdish Democratic Union Party (PYD) and People’s Protection Units (YPG), which Turkey claims is affiliated with the terrorist Kurdistan Workers’ Party (PKK), in the northern Syrian city of Raqqa, the state-run Anadolu news agency reported on Monday.

According to Anadolu, 100 trucks carrying hummers, jeeps and lifting cranes entered the Kurdish-controlled Haseke region from the Iraqi border.
The US has sent a total of 809 trucks of military supplies to the PYD/PKK in the region since June 5. US aid to groups including the PYD contain 12,000 AK47s, 6,000 machine guns, 3,500 heavy machine guns, 3,000 RPGs, 1,000 antitank missiles, 235 mortars and 100 sniper rifles, Anadolu claimed, based on US sources.
Despite the fact that the US aid was announced to be for the purpose of operations against the terrorist Islamic State in Iraq and the Levant (ISIL) in Raqqa, the pro-government media on Tuesday claimed that the supplies are part of preparations for an operation against areas in Syria that were taken under control by the Turkish military and Free Syrian Army (FSA) fighters during Operation Euphrates Shield between August 2016 and March 2017.
“Target of US is Euphrates Shield” wrote the pro-government Star daily on its front page on Tuesday, recalling a recent statement by Brett McGurk, the US special presidential envoy for the Global Coalition against ISIL, who claimed there was a link between Turkey and the presence of al-Qaeda-affiliated groups in Syria’s Idlib province.
The pro-government daily in a front-page story said Turkey blamed the US, claiming that Washington has started the state-building process for the PYD/PKK in northern Syria with its military aid.
Reacting to the statement on Sunday, Foreign Ministry Deputy Undersecretary Sedat Önal said McGurk must correct his statements if he did not aim any provocation.
“… And al-Qaeda has taken full advantage of it. And Idlib now is a huge problem. It’s an al-Qaeda safe haven right on the border of Turkey. So that’s something obviously we will be in very close discussions with the Turks on, and I think as we did in some ISIS areas in sealing the border making sure nobody can cross is something we might have to think about in Idlib province,” said McGurk during a speech at the Middle East Institute in Washington, D.C., on Thursday, underlining that it was a result of Turkey’s unchecked transfer of tens of thousands of tons of weapons and allowing foreign fighters to get into Syria.
“Because it’s a huge problem. It’s a different problem than ISIS, but it’s a big problem, and something we have to very much focus on as a counter terrorism objective,” added McGurk.
The pro-government Yeni Şafak daily on Sunday called McGurk “a shameless blackmailer”.
Turkish President Recep Tayyip Erdoğan said on June 28 that that Ankara was ready to undertake a new military operation in northern Syria similar to Operation Euphrates Shield, in an interview with the Russian Izvestia newspaper.
“Turkey will not allow the establishment of a Kurdish state in Syria and is ready to carry out another large-scale military campaign if needed,” Erdoğan said.
In a bid to clear Turkey’s border of ISIL and stop the PYD, whose armed wing is the YPG, from merging its Kobani and Afrin cantons, Turkey along with FSA troops took control of a 2,015-square-kilometer area after launching Operation Euphrates Shield last August.